After the flowers of the divine, the rose and the lotus, Florario, the book I am following for my exploration of myths and legends of plants and flowers (more about it in this post), presents a chapter about the cosmic trees. The very first of them is the ash tree (frassino in Italian), for which the most well known traditional tale is that of the Yggdrasil. Because of the popularity of this myth,Yggdrasil has been represented many many time by different artists in different historical periods..so I am pretty sure that I will not come out with a very original image. Nonetheless, it's a fascinating subject and I'll give it a try. Here is the original rough (very rough) sketch and the pencils of the piece. Now I am slowly inking with my grey Copic Multiliner...it will take a while. ;) 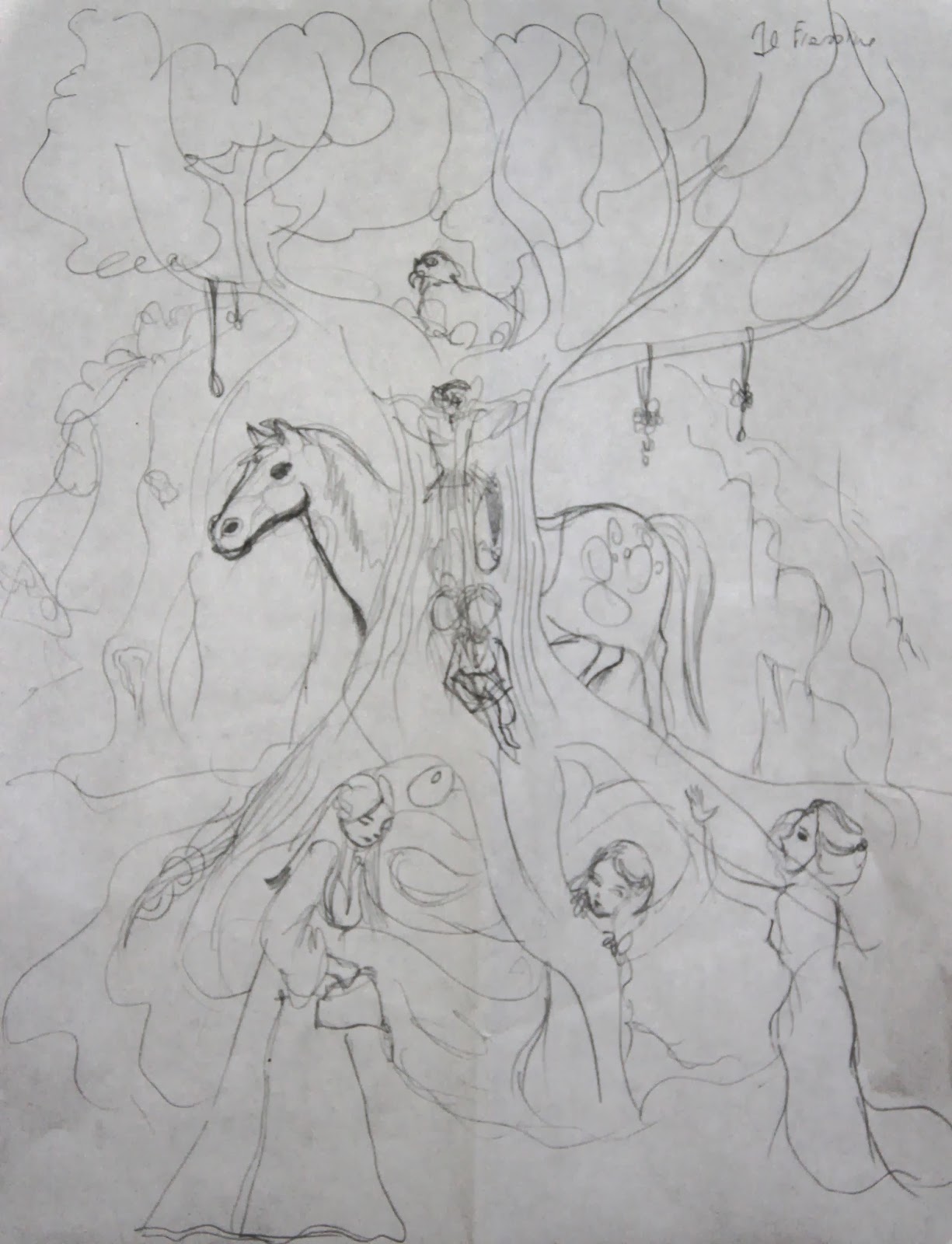 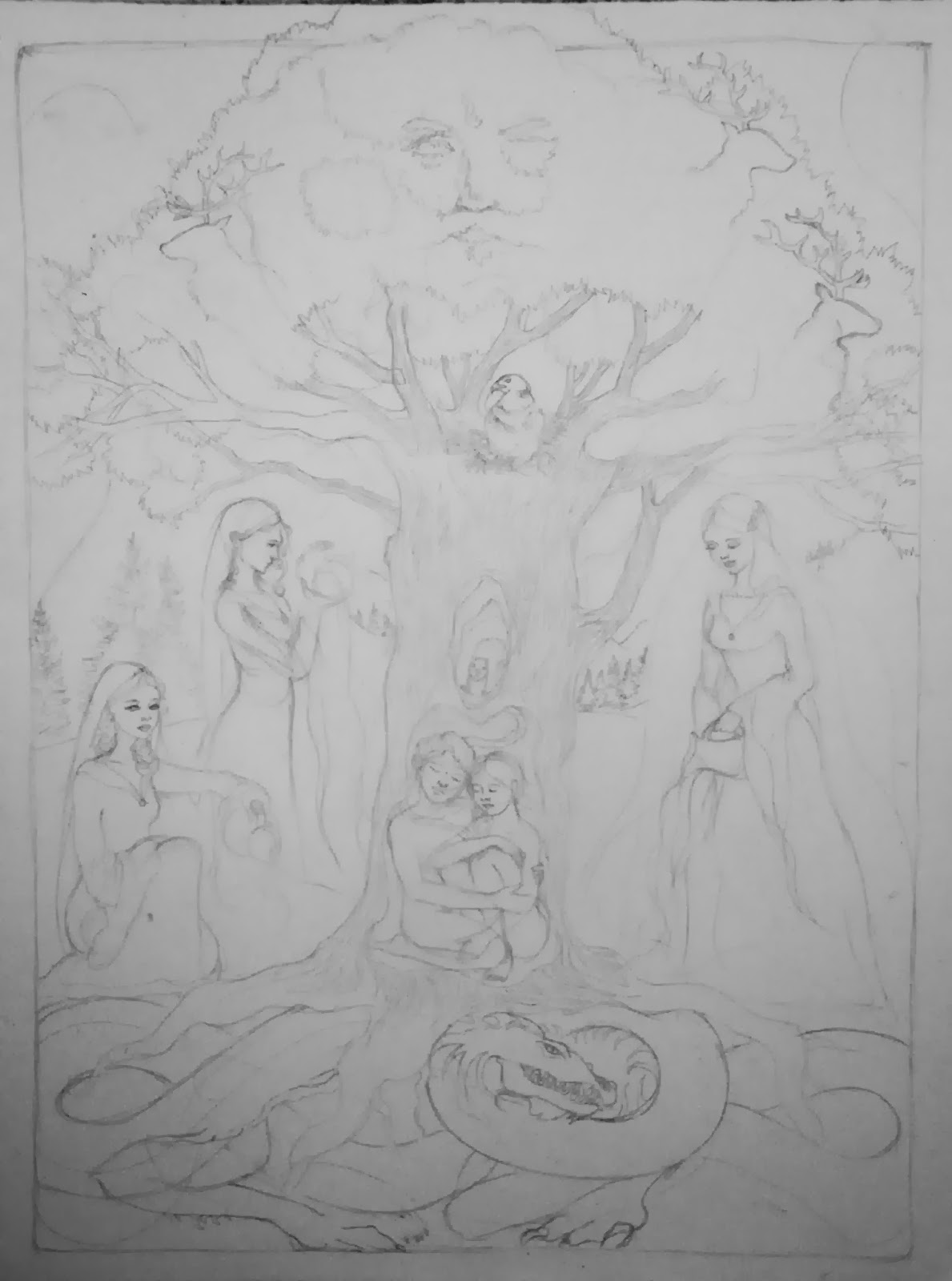 Linking up to Manon's Paper Sundays.

Stay warm (we are having snow this weekend...again!) and may spring come to your home soon!
Posted by Astera at 10:53 PM 18 comments:

Last two, plus a bonus...actually 3. After a month of black and white, here is some color, a drawing I made for Bella. Enjoy and happy March! 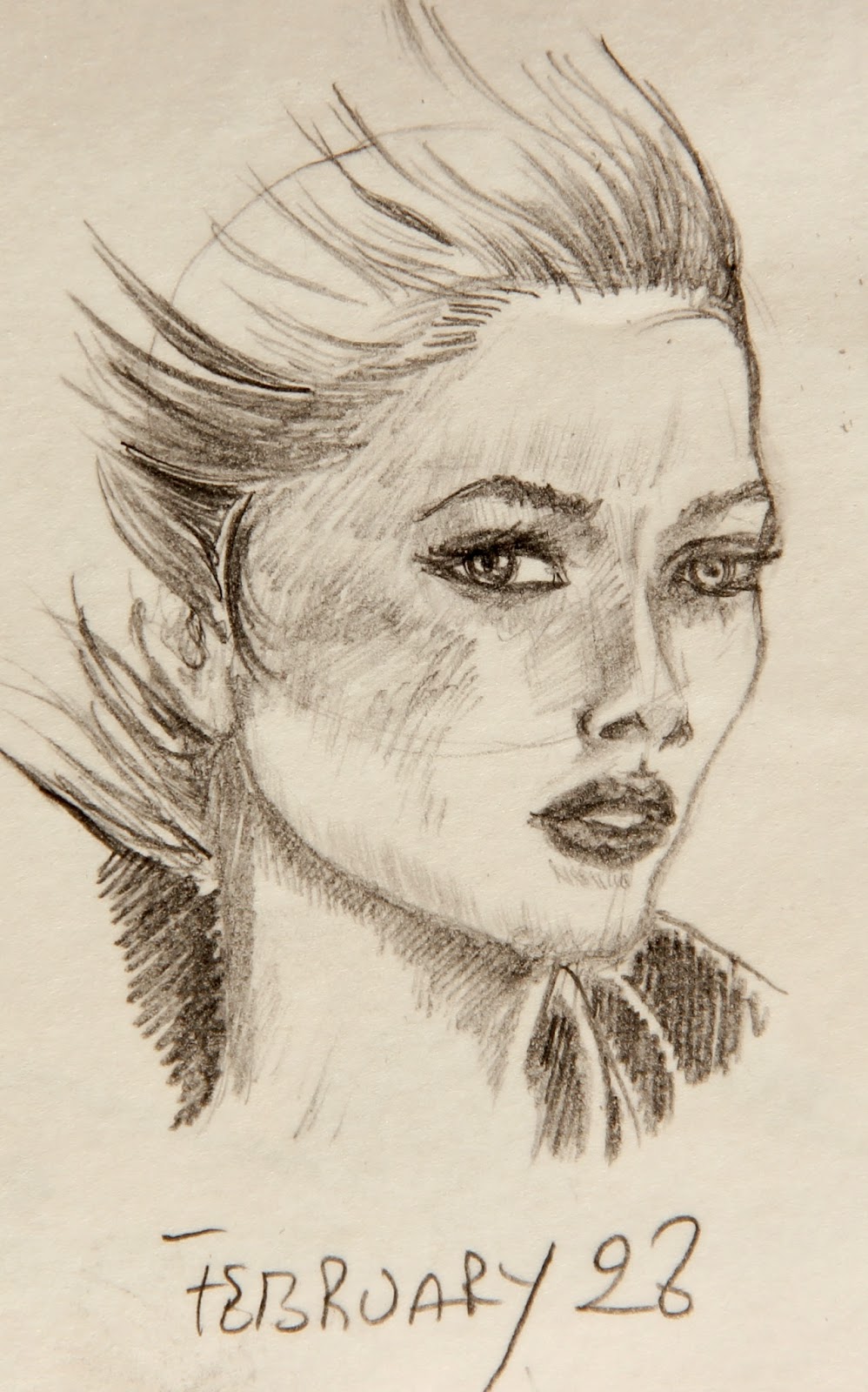 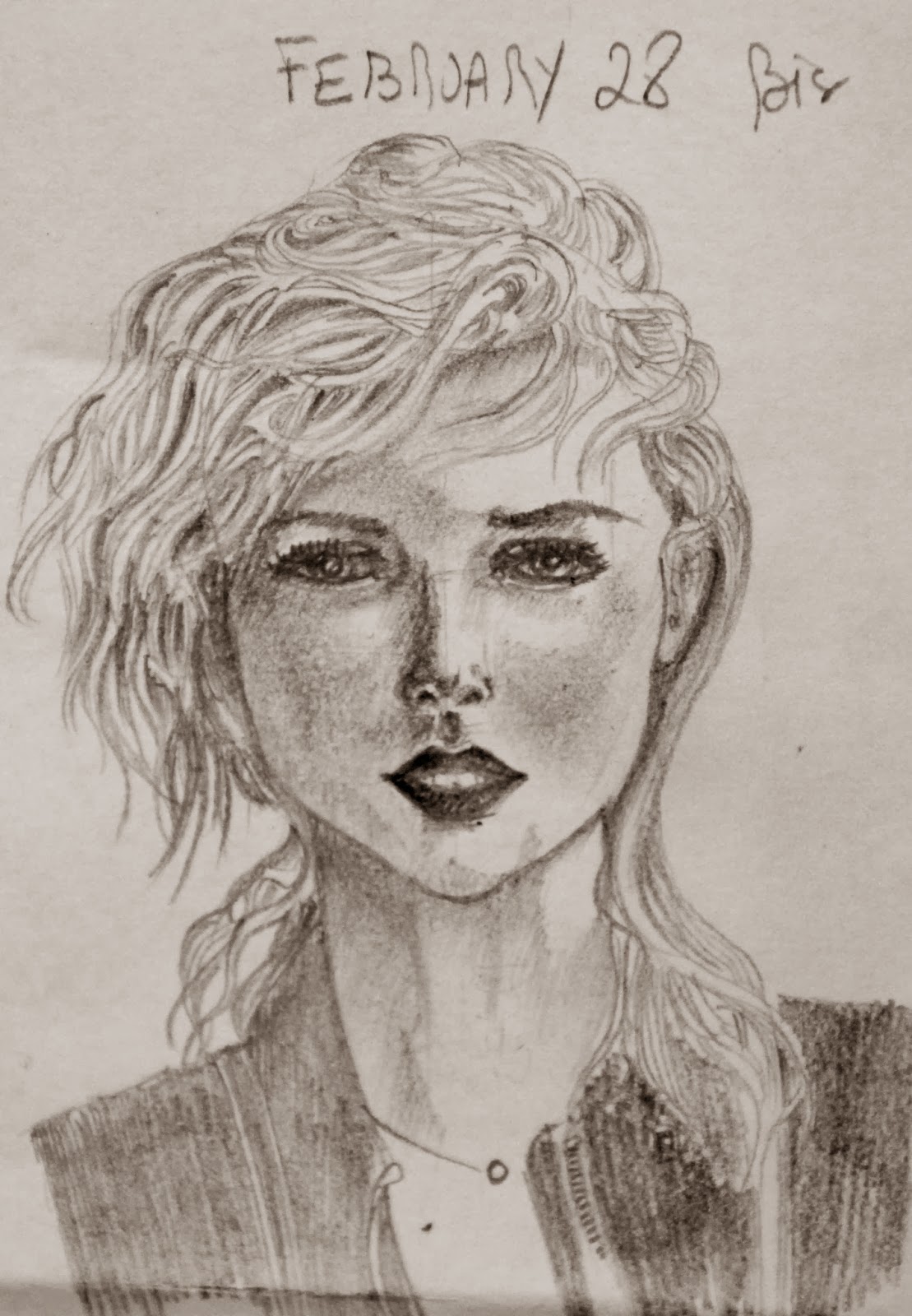 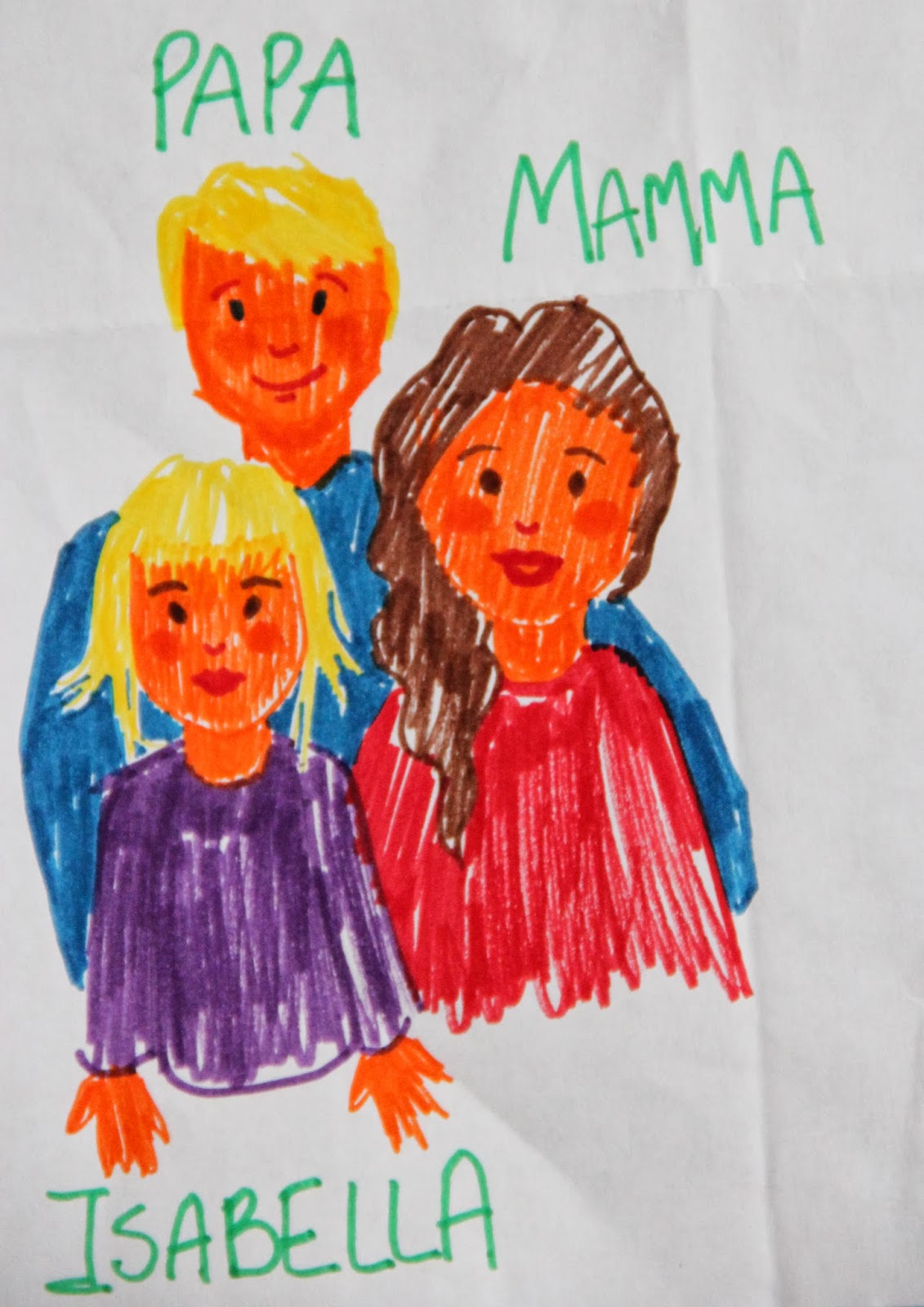 
Many many thanks to Ayala for bringing back the challenge. As always, it has been extremely enjoyable to see the beautiful art, meeting new art loving folks, and practice freely, for the sake of exercise. I don't know about you, but I definitely need more of that in my life.
Thank you to those who visited and especially to those who left comments: you guys made my day every time!

Almost there! Here come faces # 26 (done with an old pencil) and #27 (done again with the mechanical one, with a slightly harder lead and a sharper point). 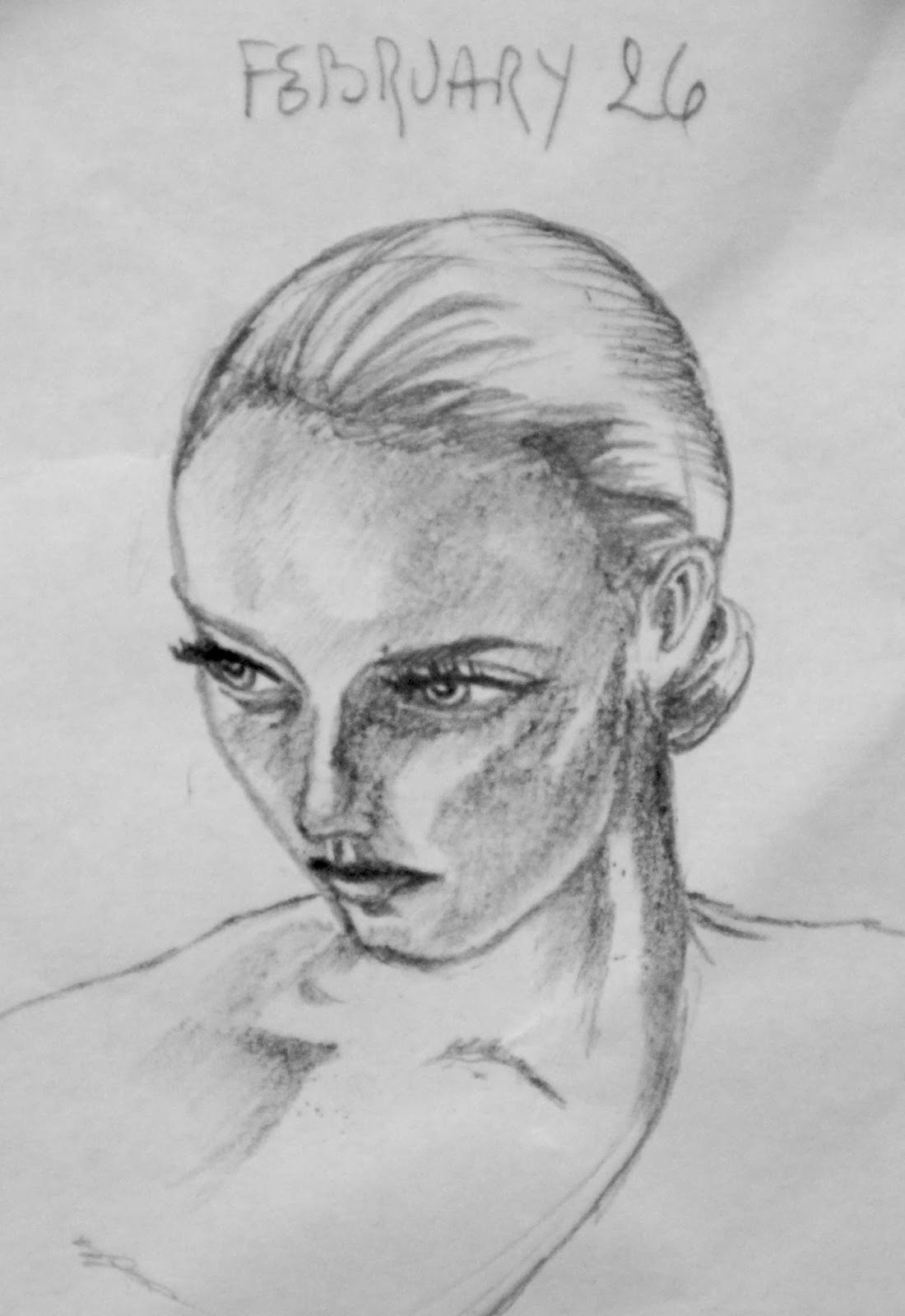 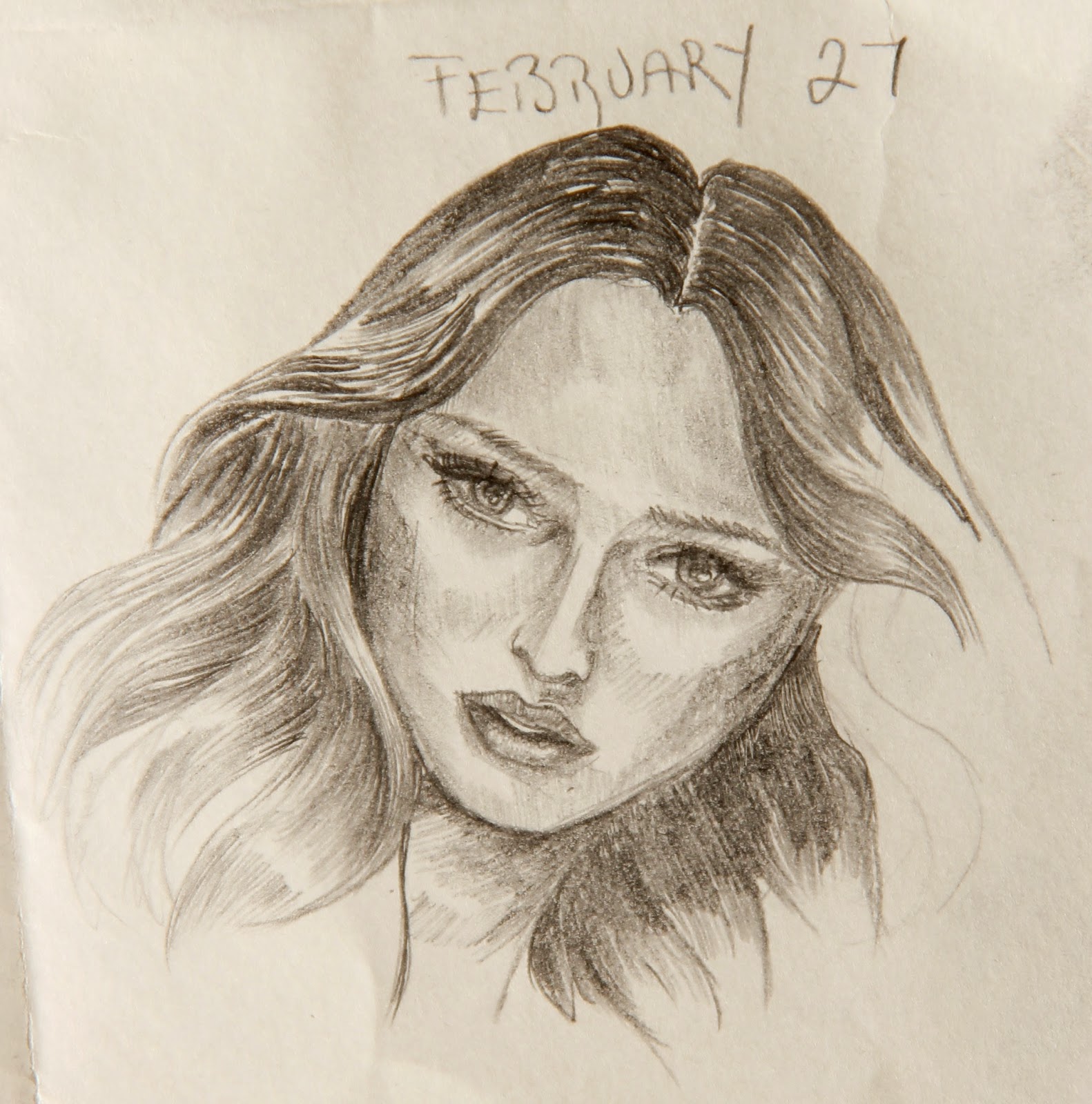 Here is another week and here are my sketches. Both are Vogue ladies and again both do not resemble the models at all. ^^ I am rather happy with 24, while 25 seemed cuter while I was drawing her...now I realize that her chin is rather masculine and too round (that seems a problem I have with profiles...must work on that!). 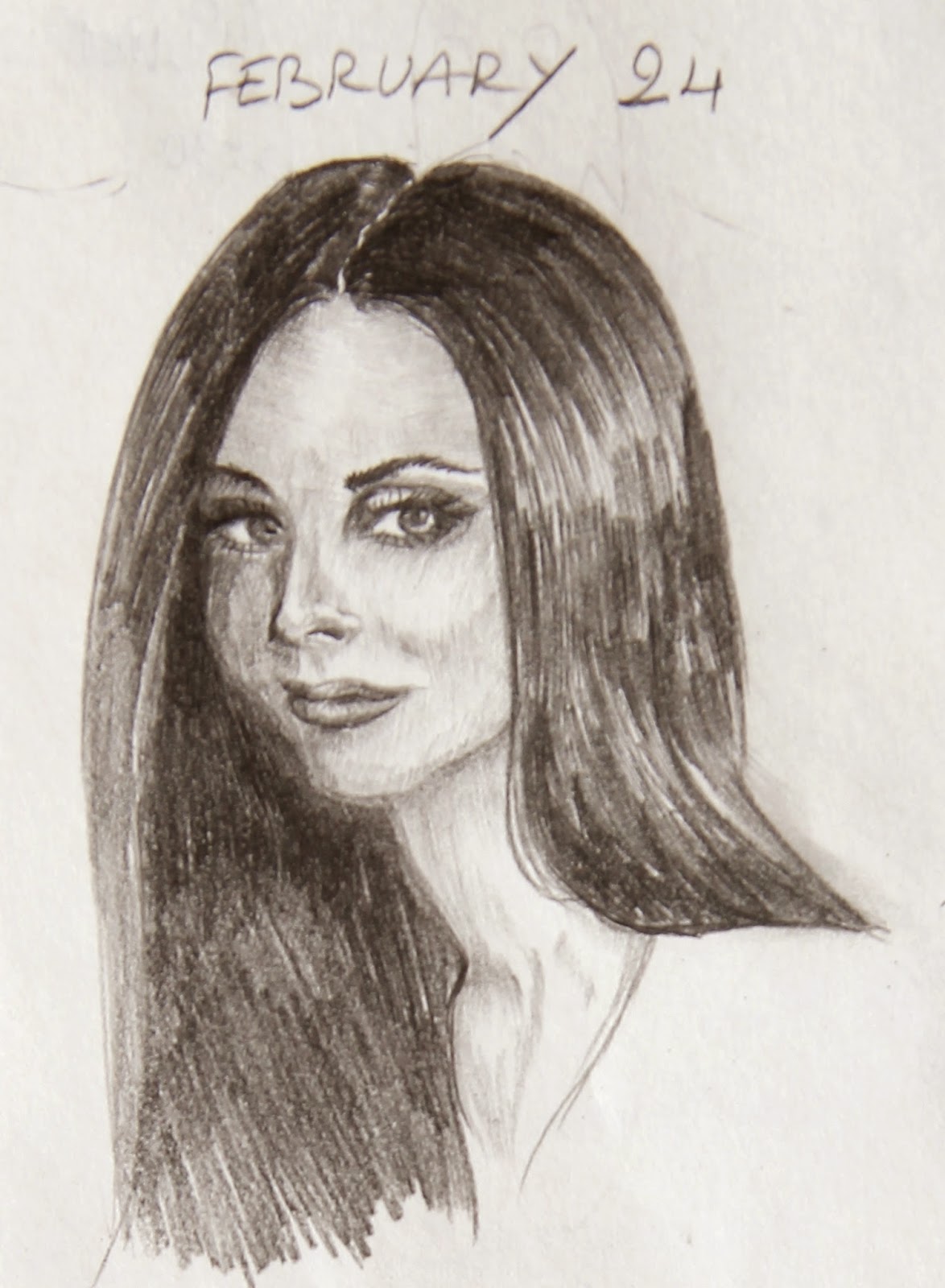 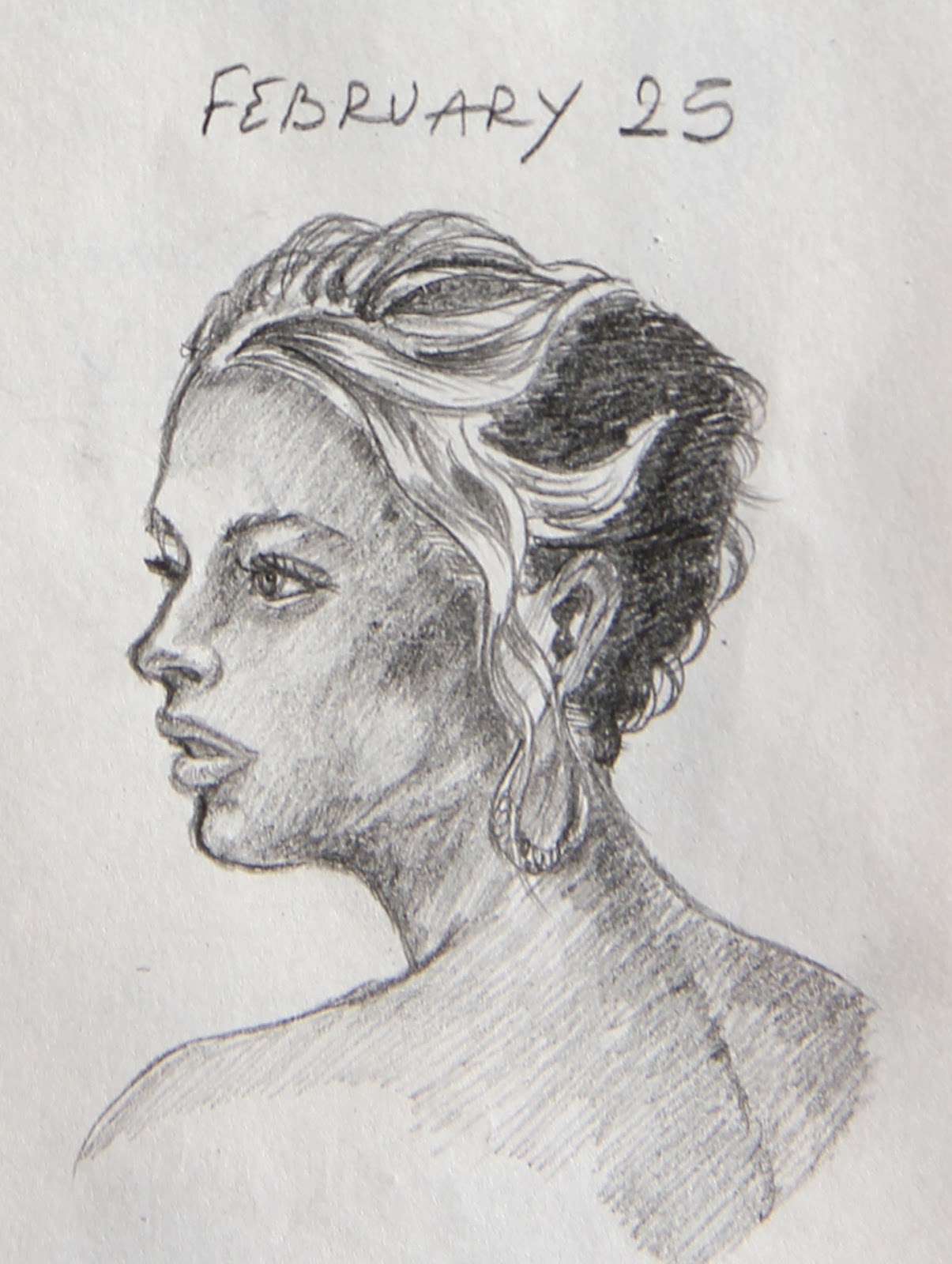 I could correct it, but the deal was to work on these exercises quickly and as naturally as possible. Once a piece is declared done, there is no going back.
On to the next faces!

Have a happy and productive week!
Posted by Astera at 6:42 PM 3 comments:

Hello everybody! Unexpectedly, this morning I had time to do yet another sketch, while skyping with my mother in law. Bella was playing nearby with my husband, so I caught a few moments and I made this. Have a lovely Saturday! 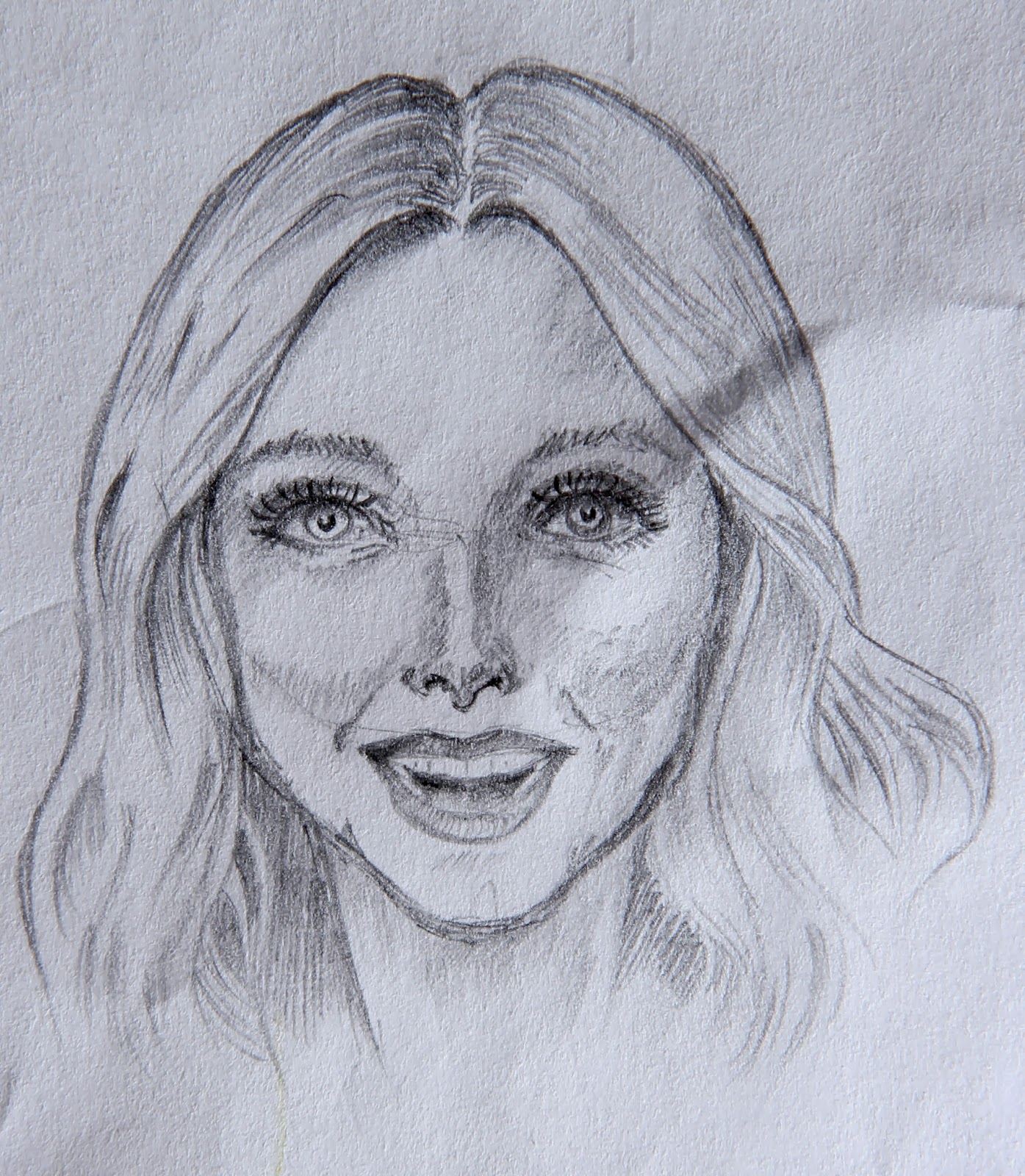 Linking to 29 Faces and Paper Saturdays.
Posted by Astera at 5:29 PM 12 comments: 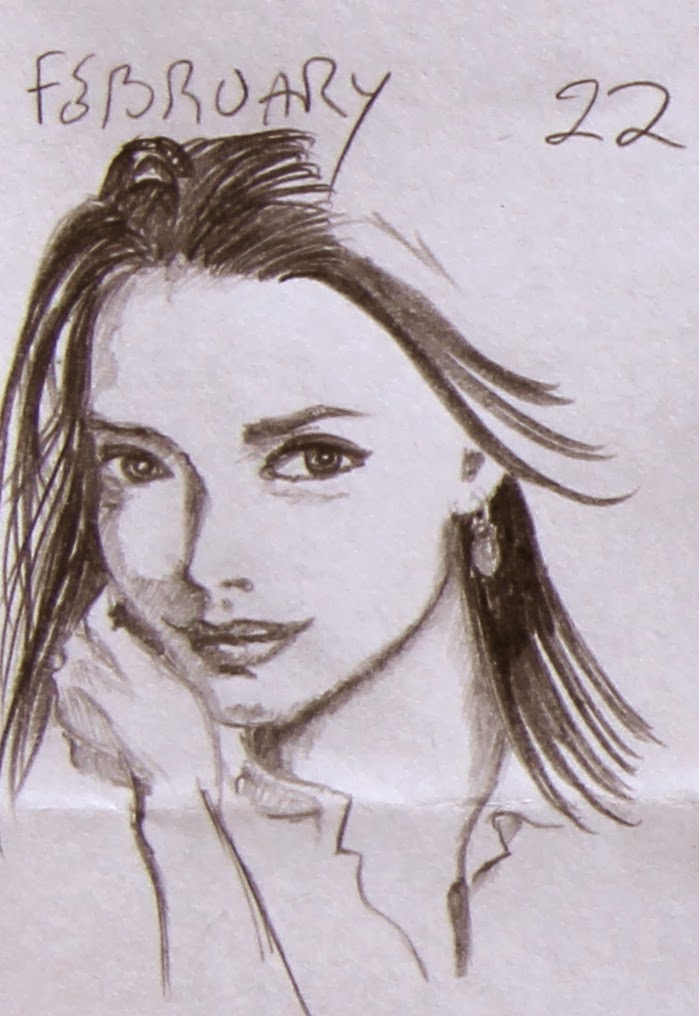 A lady emerging from darkness. My characters are usually shown under a rather direct strong light. I would like to add more drama by using stronger shadows like in the case of this sketch... 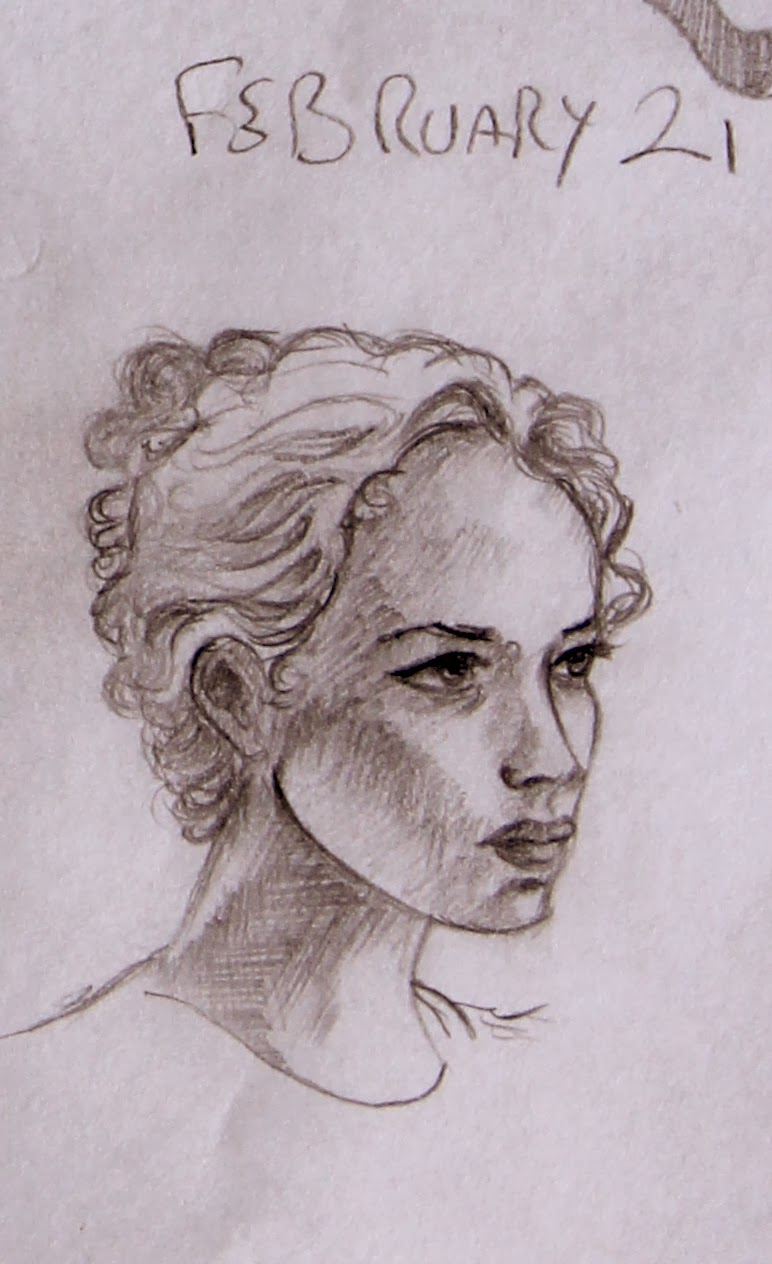 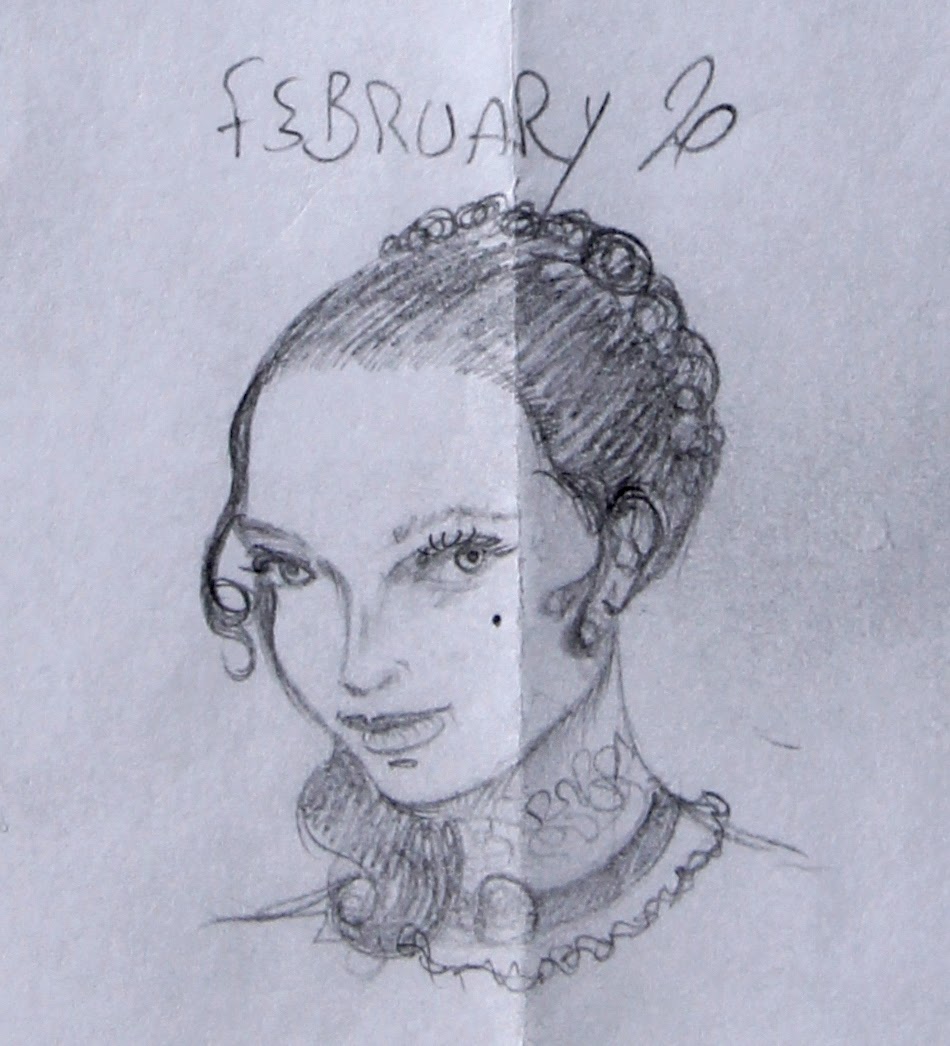 A girl from a cowboys movie. She did not turn out very pretty (the eyes look funny to me), but...eh. Not everybody is a classical beauty! ;D

A fresh faced girl for your Wednesday. Enjoy! 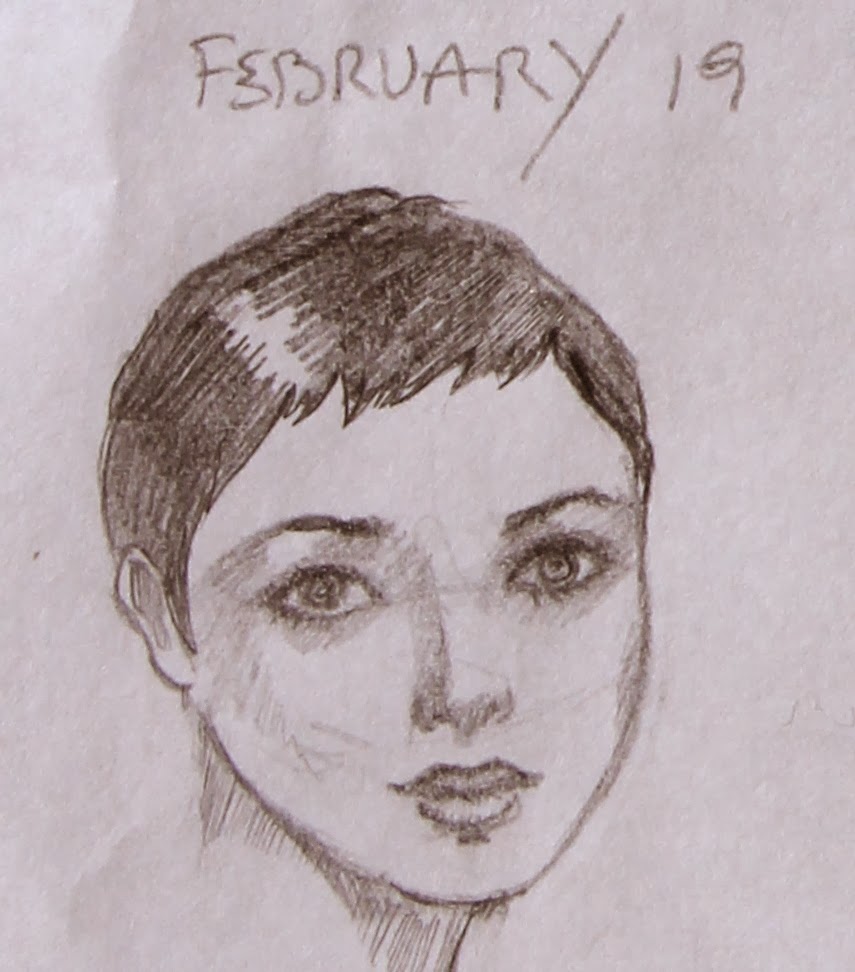 Now, I like the way this veiled lady turned out. After shading the face, I was afraid to ruin it by adding the veil. Then I told myself that this is the perfect safe place to experiment and take little risks.
So I went for it. :) 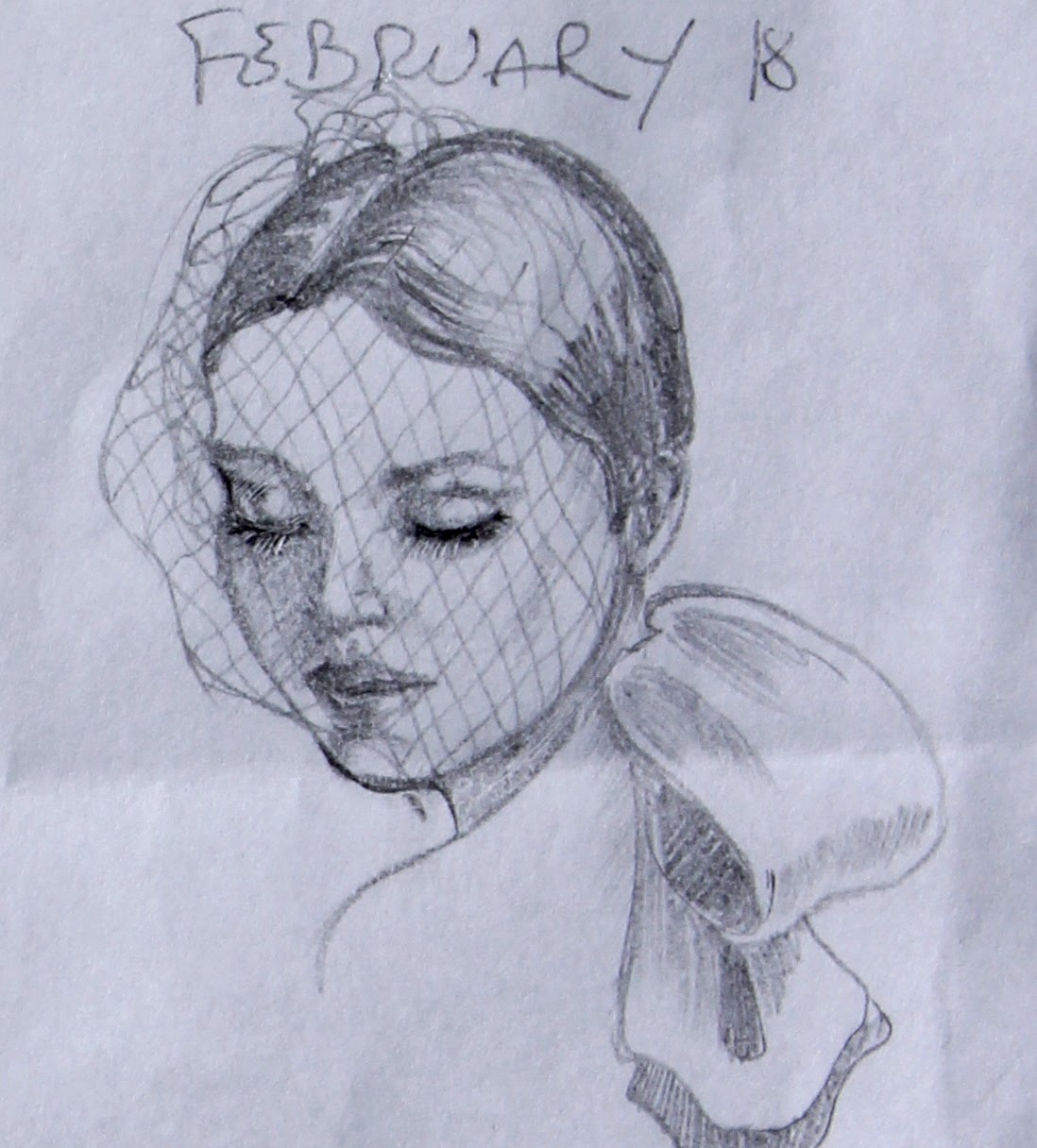 In general, I am more satisfied with my faces than during September's challenge. I guess back then I was trying too hard. Using cheep paper (the back of my daughter's report cards from the daycare) and a random pencil I feel more relaxed and free to make mistakes and that sometimes can give unexpected results.

At the beginning of the month, I worked on the sketches with a regular pencil (with a rather bad point as you can see clearly in Faces 1 and 2), then I switched to a mechanical pencil with a consistently fine tip. That helped a lot. The lead is much softer than the one I use in the drawings that I end up coloring. It smudges easily and it would probably not work too well for my usual purposes ( it's a bit hard to erase), but for these sketches it felt surprisingly nice to handle and made me wonder whether I should switch to a mechanical pencil (with an appropriate lead, of course) permanently.
I must also say that I have essentially no skills in the refined art of pencil sharpening, which I know I should probably consider more carefully...I never thought it would matter to me because I end up inking over my pencils anyways. Any opinions in the matter?

What kind of pencils or special drawing tools do you use? How did you discover them?
Posted by Astera at 8:27 PM 3 comments: 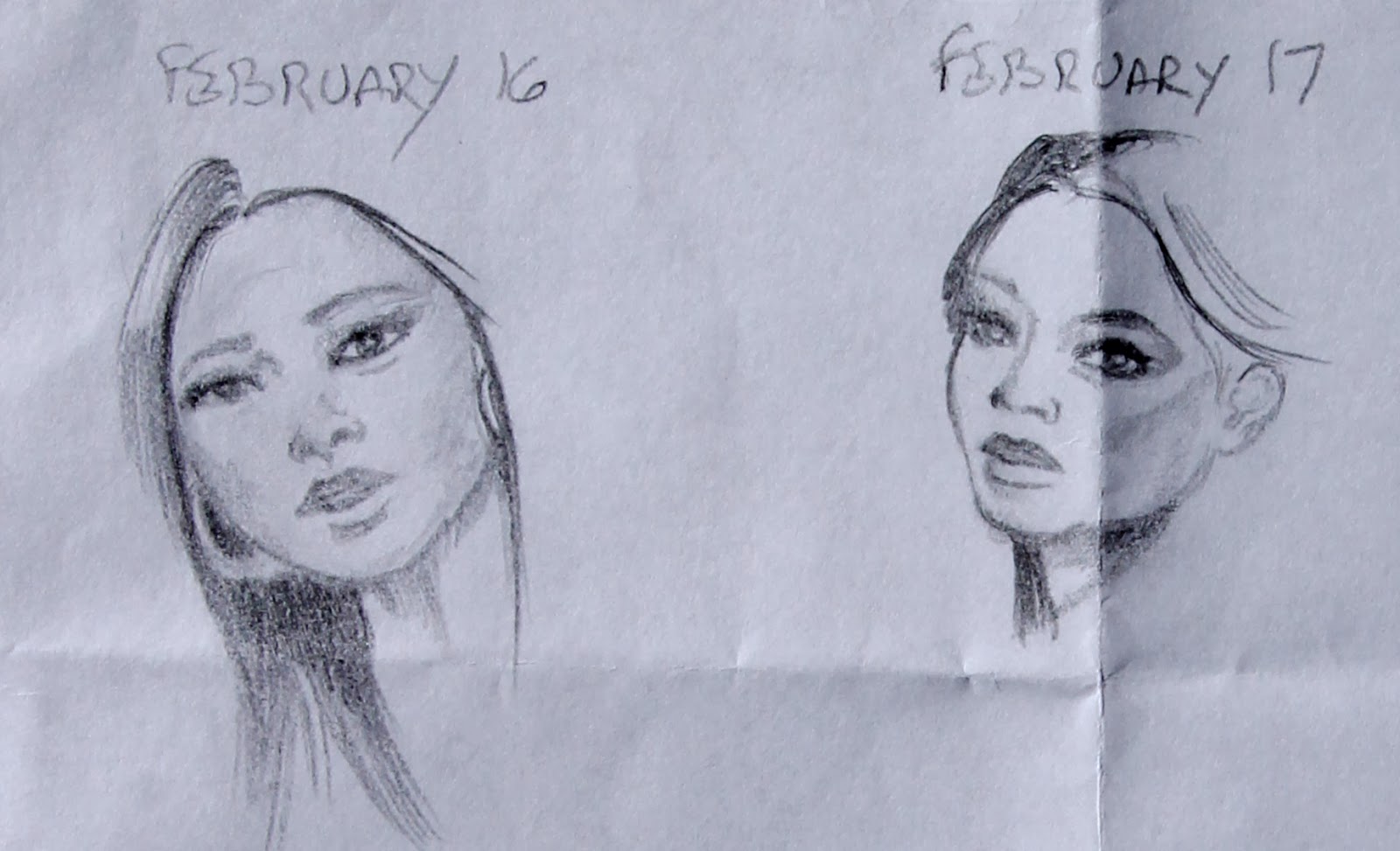 So, after inventing faces, I decided to work on learning how to shade faces more realistically. I took one of the usual old Vogue issue that I have still to read and started going through from page to page doing quick sketches...
Here are the first three.. (do you recognize anybody, by chance?):)

Next batch of unpublished sketches for the 29 Faces challenge.

We've got a crying lady (I usually draw happy or serene people I tried a change) who has had a close encounter with a rabid curling iron (I wanted to try bouncing curls, but these made up locks look weirdly off with the character...well, maybe she is was in a pageant and did not win! ;)).

Then we've got what I believe is a soul singer. I love the hair in this case. Drawing right facing profile is always an awful complication for me, maybe because I am right handed...how is it for you? 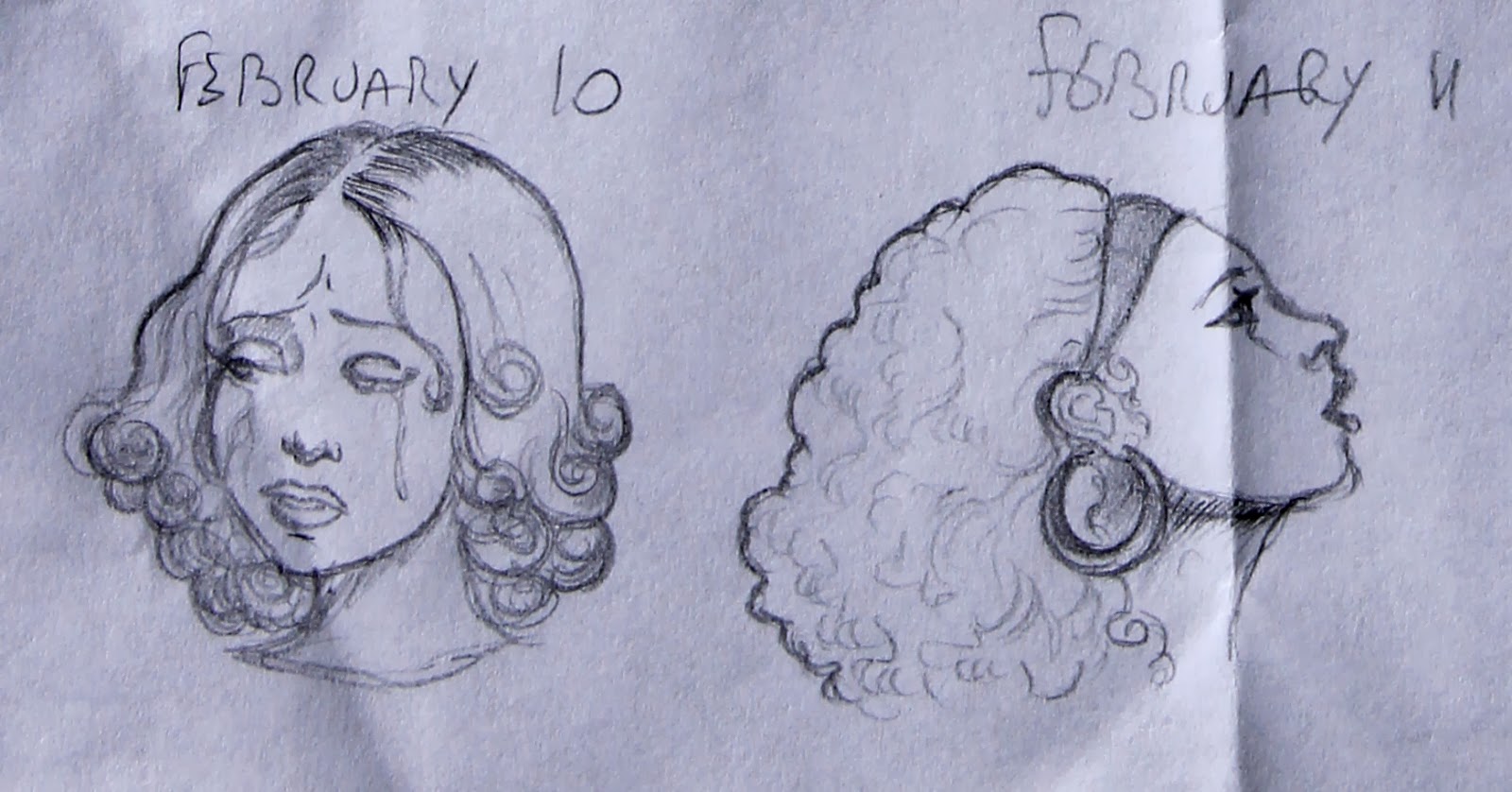 And, finally, here is a more traditionally content and maybe a bit sleepy girl. 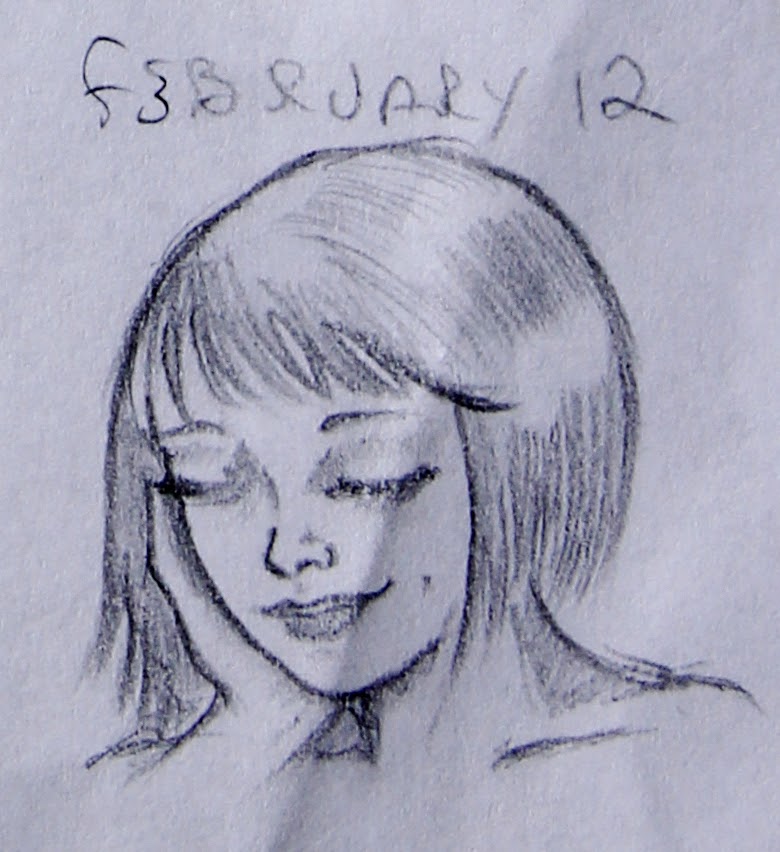 
What a week...a nightmare at work. Toddler sick at home. Weather ever gloomy and cold.
I could not take pictures, because of the darkness when I left and came home, but at least I kept a measure of sanity by keeping sketching.

Today was finally sunny and I took a couple of decent photographs. Here are the characters from February 8 and 9. 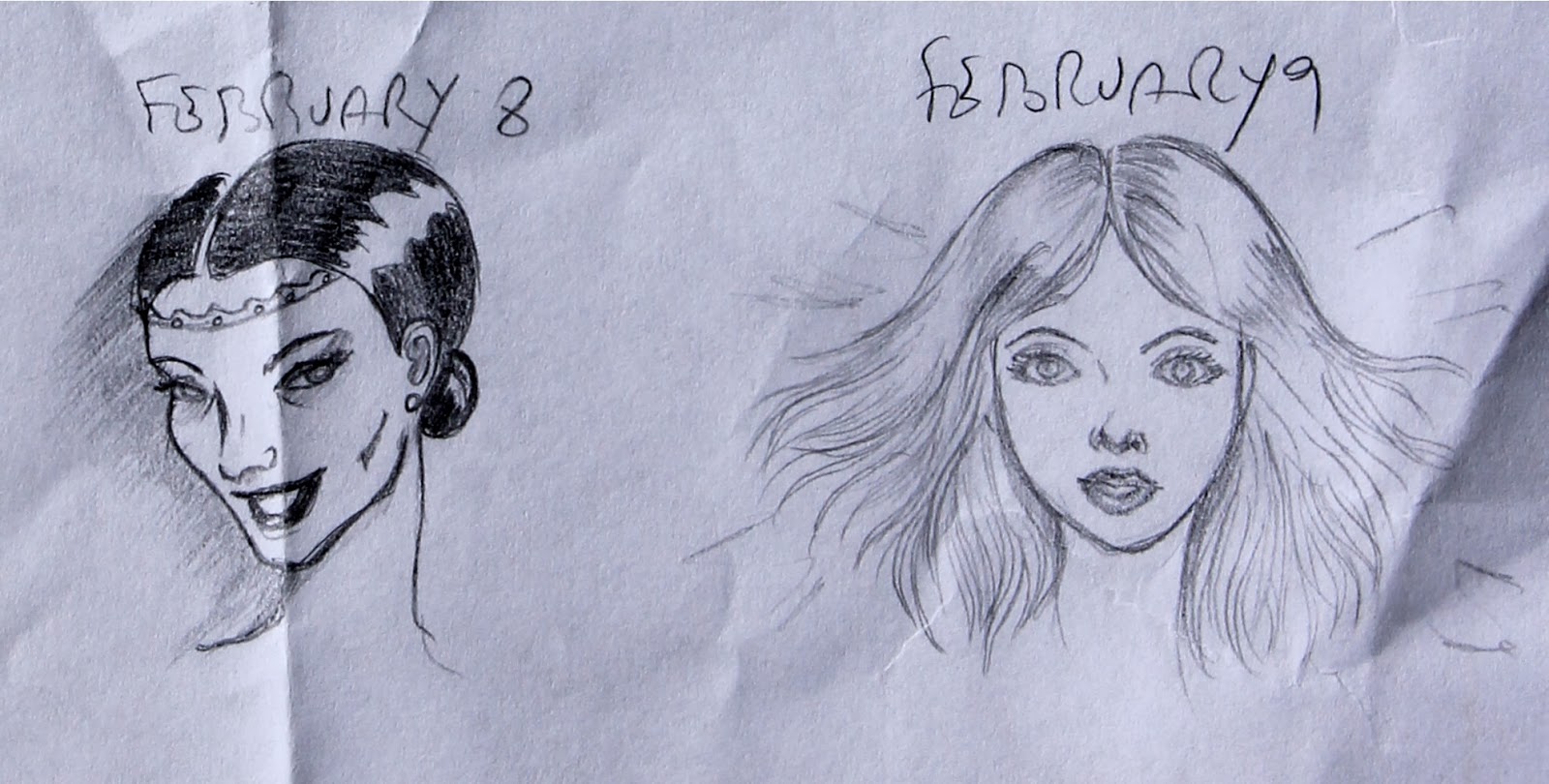 Number 8 is maybe a follow up to 7...an evil queen? Or she could be a wiry ballerina...she has an unusual look for my standards, with lots of sharp angles...I am not sure she is exuding malice...she could be just a very energetic and decisive lady. What do you think?

Number 9 seems to have made a wondrous discovery...or maybe she is the wondrous discovery herself (we were still watching Fringe, at this point and I guess she could be Olivia displaying some of her hidden powers)!

A sweet sleeping girl...what fairy tail is she from? 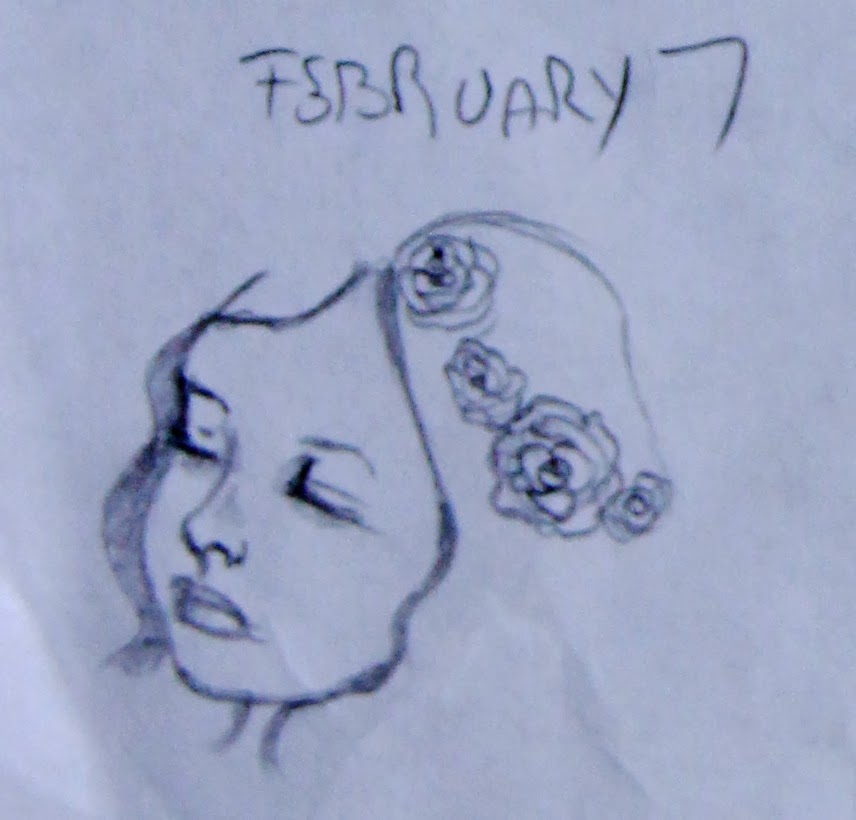 This is for 29 Faces. I am also linking to Paper Saturday.
Have a happy and restful weekend, everybody!
Posted by Astera at 9:07 PM 12 comments:

Hello again, here are yesterday's and today's faces...who are they?
5 could be a detective of the future (somehow she looks a bit like Rihanna...it was completely unintentional...in fact I bet that had I wanted to actually make a portrait of her I would never had done better ;)).
6... maybe a cherub or an ancient statue? 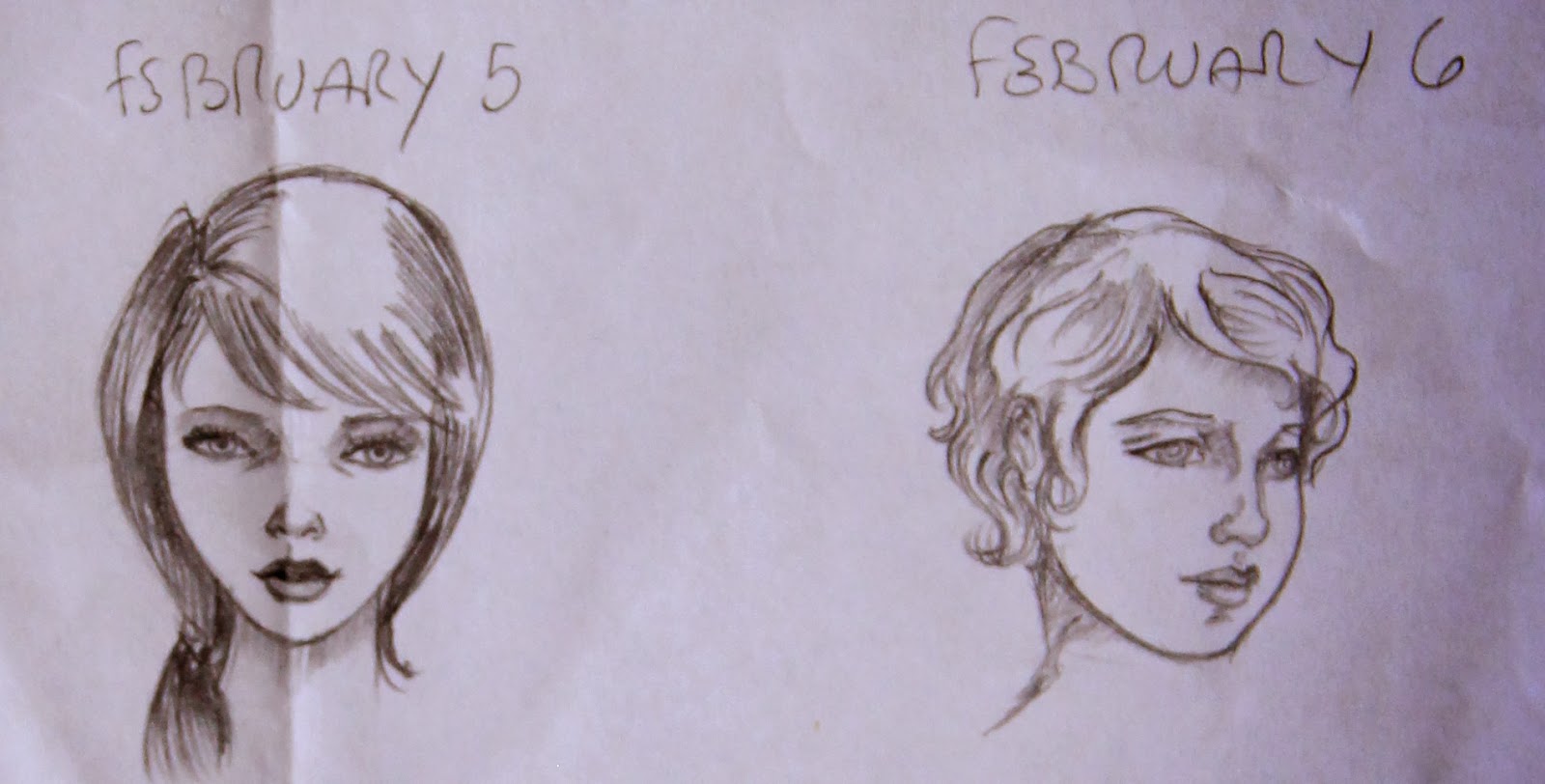 Here are more faces for the challenge. :) 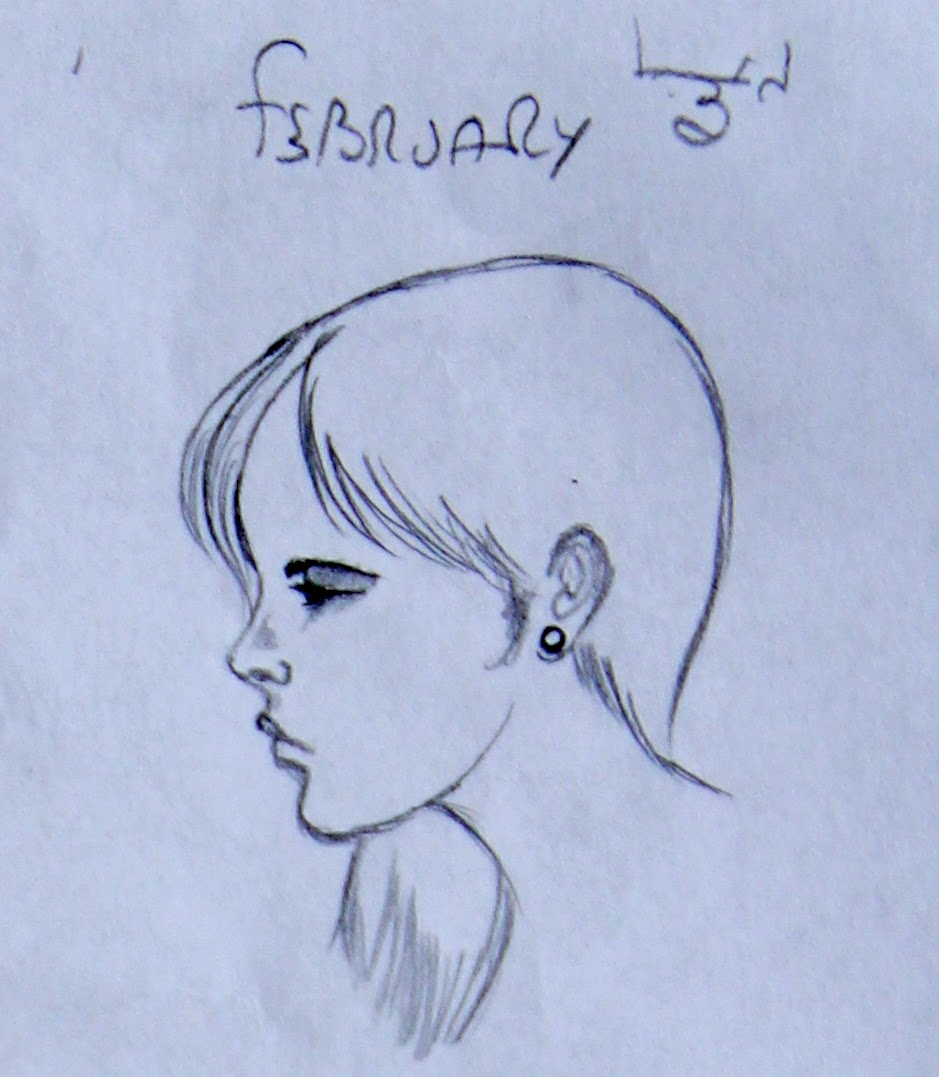 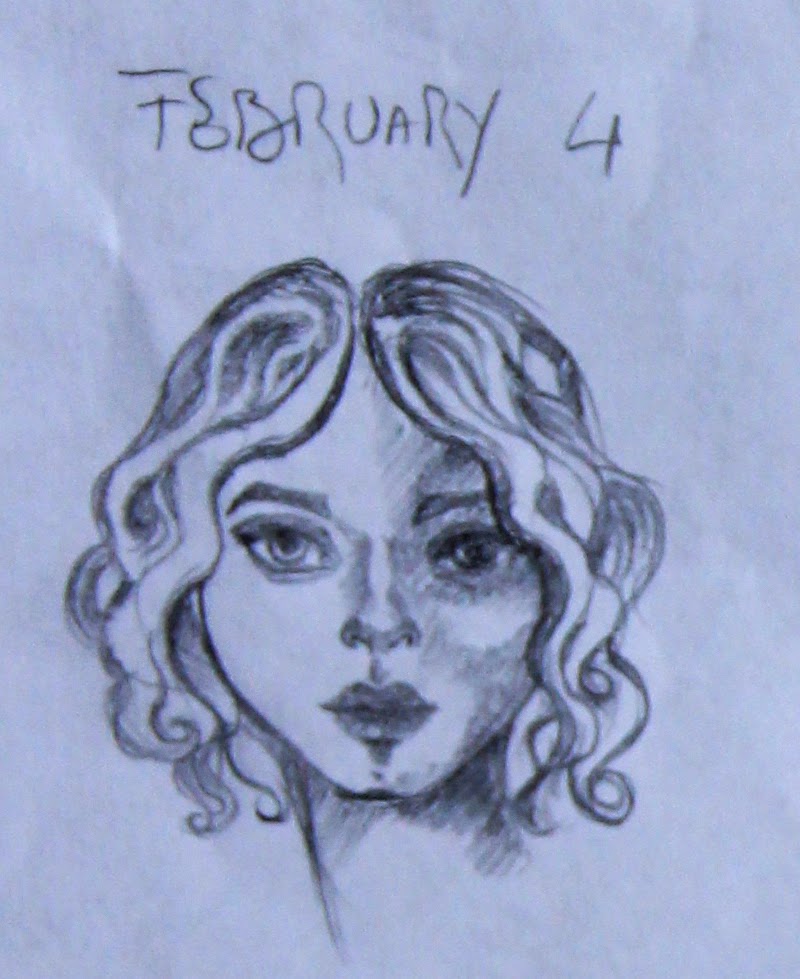 
By the way, I wanted to thank Ayala art for hosting this fun challenge again and for making me realize I had the captcha thingy on...I had no idea! I have disabled it now. :) My apologies to the friends that had to endure it and please...leave your comments: I love reading them.

Also, these days are very very busy and I find I have little time to peruse your sites...but never fear...things are looking up and in a couple of days I'll be able to visit and enjoy with calm you beautiful works...and of course to leave you messages and also answer your comments! :)
Posted by Astera at 7:48 PM 7 comments:

I thought I would finish this earlier, but my key marker for the background, YG11, decided it was time to give up on me, so I had to find the time and willpower to go and buy it. These days the cold is so ridiculous that any non strictly necessary errands are systematically postponed.

Anyways, here it is, finished at last...with details. 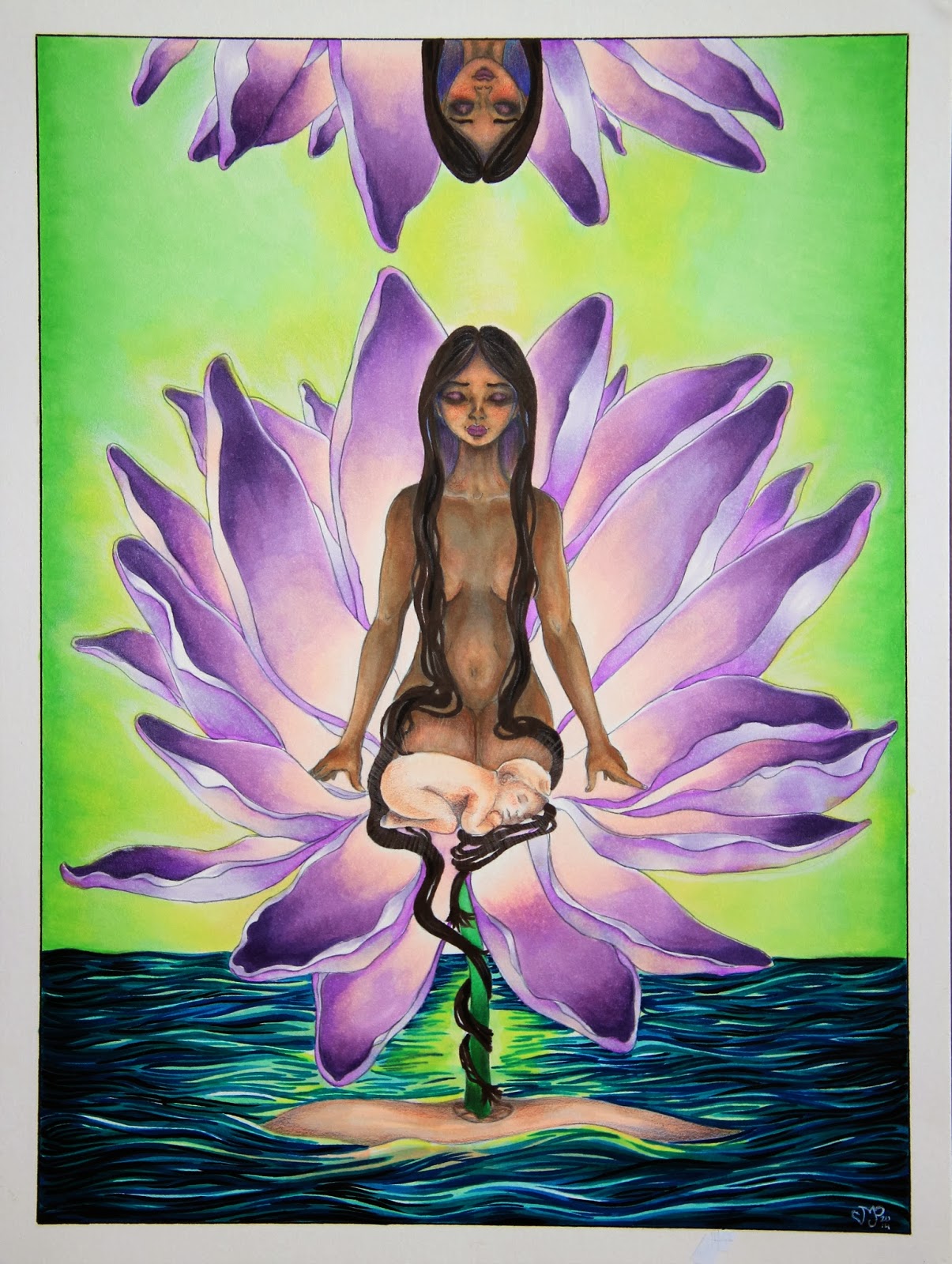 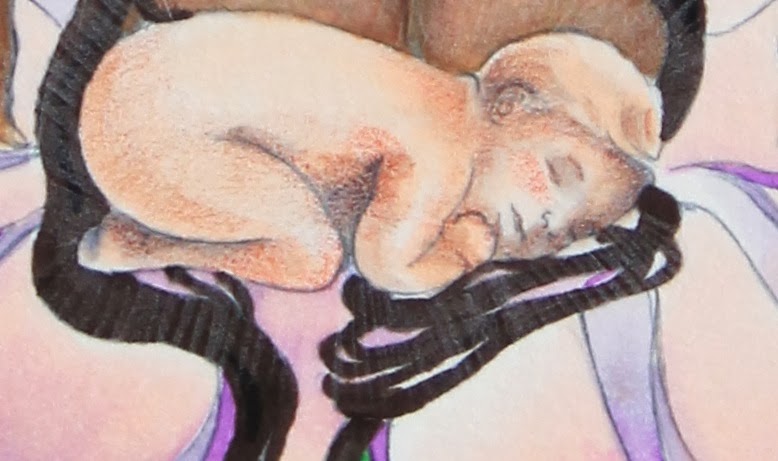 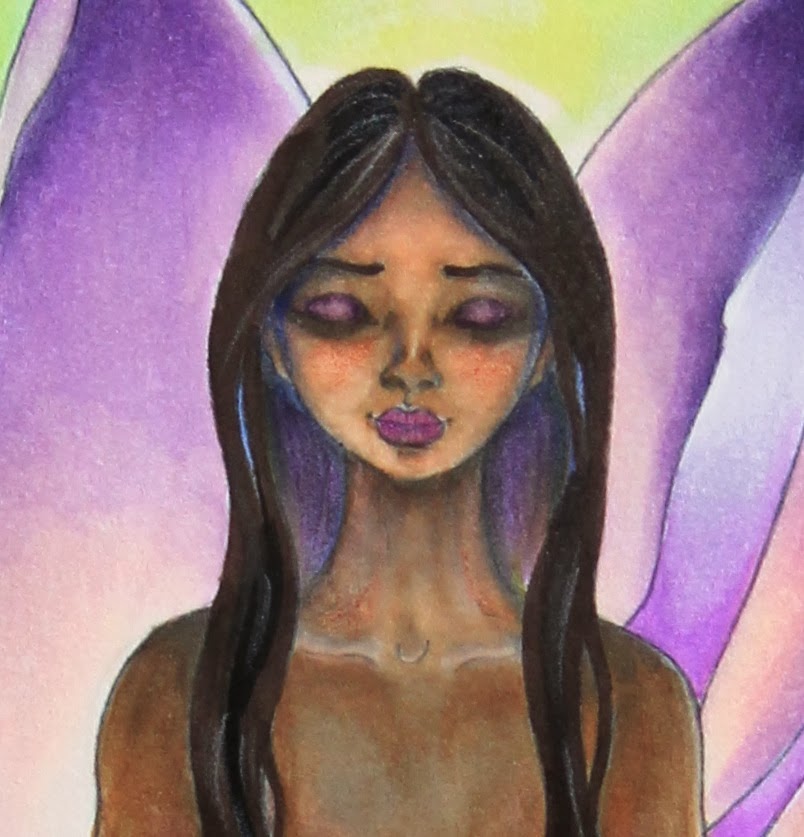 For this Lotus drawing, I was inspired by the chapter on the flowers of the Absolute in the book Florario. "As Vishnu was resting in the ocean, a lotus rosed from his navel...it was so big that it could contain the entire world. That Lotus generated Brahma and, with the powers of the sleeping God, he generated the world". That's the baby full of light. At the same time, the cosmic lotus was also the symbol of the Goddess Shri (also known as Lakshmi), essentially considered one of the representations of the Great Mother (if I understood correctly ;)).
I thought these two tales would work well together in this piece.
As an extra touch, since I have been watching Fringe (Whaaat? wait for it...;)) and have been ensnared in the tale of parallel universes and alternative realities, I represented the multiple realities as a reflection of the Goddess in a imaginary cosmic mirror.

Happy rest of the week!

Linking to 29 Faces for the details of the faces, although I consider it a bonus, as I drew these characters before the challenge started. :)
Posted by Astera at 9:00 PM 2 comments:

Hi! I was unsure I would have time to work on the 29 Faces challenge by Ayala, but, following her suggestions, I thought I could do it, if I could keep my faces, uncomplicated, spontaneous. So here are my small sketches for yesterday and today...see you in the next days. :) 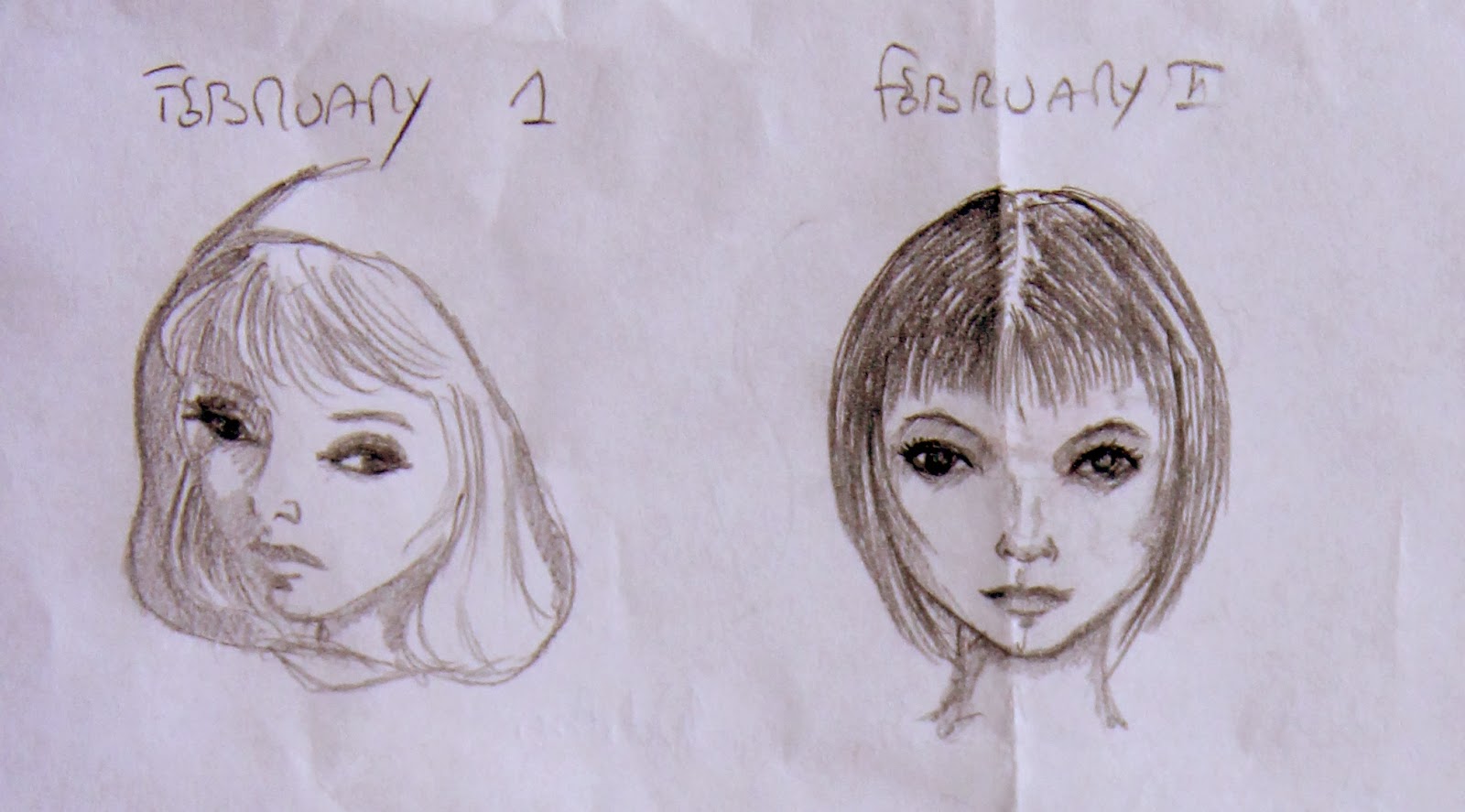