In the past couple of months, I started working on a personal project centered on flowers and their role in myths, legends, and religions throughout history. Like most people, I enjoy looking and savoring the smell of flowers. They are a marvel of nature and a balm for the eyes and the spirit. My love for them, however, is not matched by my knowledge of them. I am terrible at remembering their names as well as the names of plants in general, both in Italian and English! What to do about that?

Many years ago an Italian journalist, Alfredo Cattabiani, wrote a book, Florario, about the meanings of plants and flower in different cultures. I don't know if it has been translated in other languages,

My mom bought it for me and I began to read it, but my teenager self found it too dense and erudite for my tastes. So I decided to put it aside for when I would have reached a more mature and reflexive age. Apparently this is the time! When I went to Italy last summer, I recovered it from my old bedroom's bookcase and took it back to the US to give it another try. After perusing it, more than 20 years later, I still think it's best taken in small bites (I have a short attention span!), yet it's a fascinating summary of flower lore that I find very inspiring.

My plan is to follow the book, chapter by chapter and dedicate to each flower an illustration that evokes not onlythe natural beauty of flower or plant but also the symbolisms and stories that such beauty has inspired in humans in the ages past. I will finally learn my flower nomenclature... and hopefully much more!

I started with roses in Sub Rosa. I left several meanings out, by focusing on the love and secret symbolism. I followed with the Lotus of Creation, that I am about to complete (I got stuck because one crucial marker needed an ink refill and I could not bring myself to go to Blick's to buy it! ...it's to cold: I just want to stay home!!!).

Well, of course I knew what roses and lotuses looked like, but I am sure I will soon encounter several names that have to find a "face"(or viceversa "faces" that will finally find a name).

Hope you'll stick with me in this discovery journey.
Talk to you soon! :)
Posted by Astera at 2:36 PM 3 comments:

The Lotus of Creation is giving me joy and grief...part of it are coming our just as I wanted, part are driving me insane. Here is a mini swatch with tentative color schemes. I chose the fist, which was also the one I elaborated on more. You can see which Copic markers I chose for the composition. 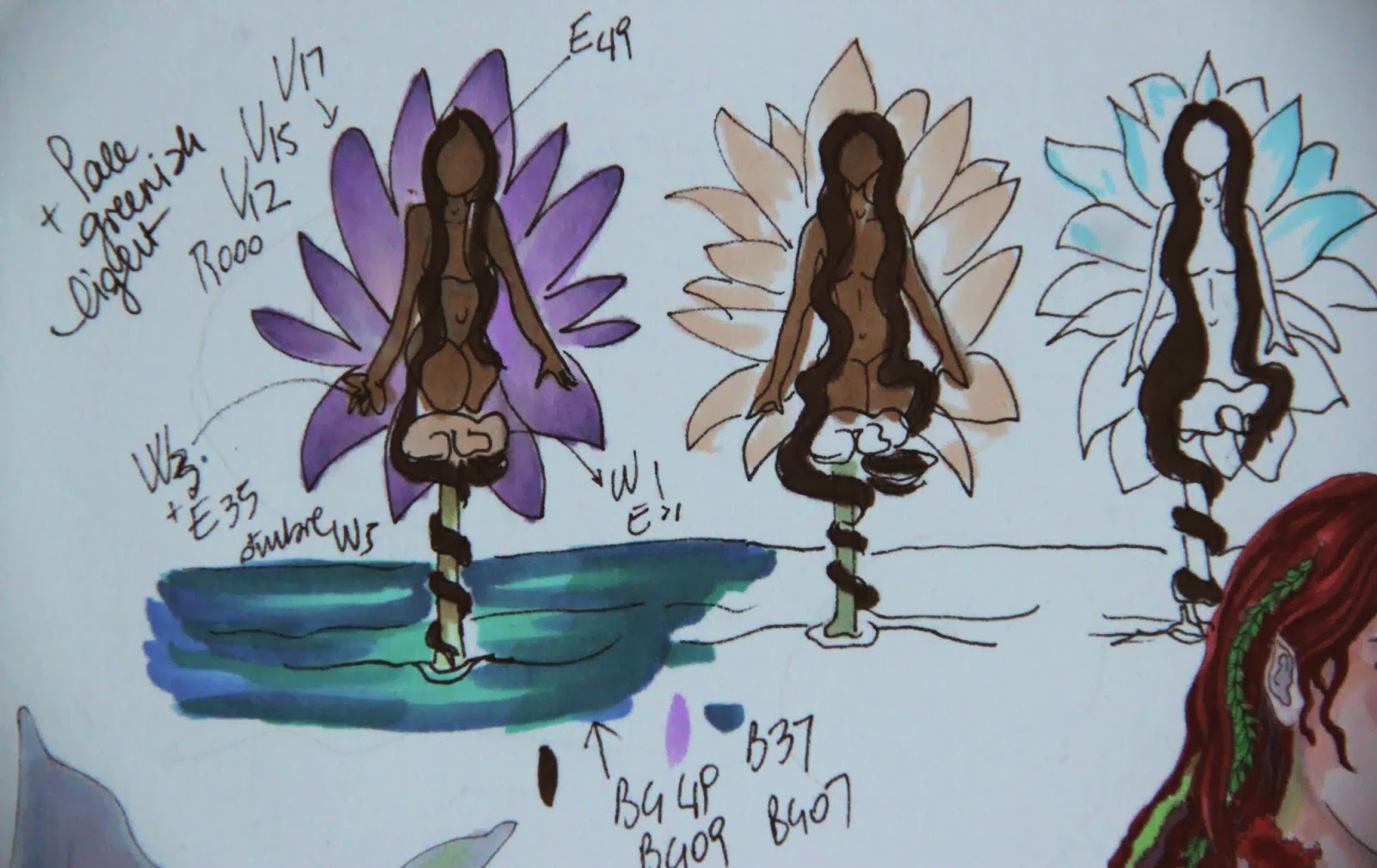 All appeared perfectly simple when working on an 1x1" surface. The trouble came when I started working on the real drawing. I want to give the goddess figure in the middle a rich chocolate skin...after all the Indian myths and legends surrounding creation are the inspiration for this piece. However, my experience with deeply dark skin tones is practically non existent...bottom line, after putting down the greys (W3 and W5), when I began layering E39, I realized I was flattening all the face features and the 3-dimensionality of the body. So I frantically tried to repair the mistake using light tones (E02 and ultimately R000) to take away the excessive color. Then I grew discouraged and started to work on the flower, which I loved. Later, I went back and retouched some more the skin. This is what the drawing looks like at the moment 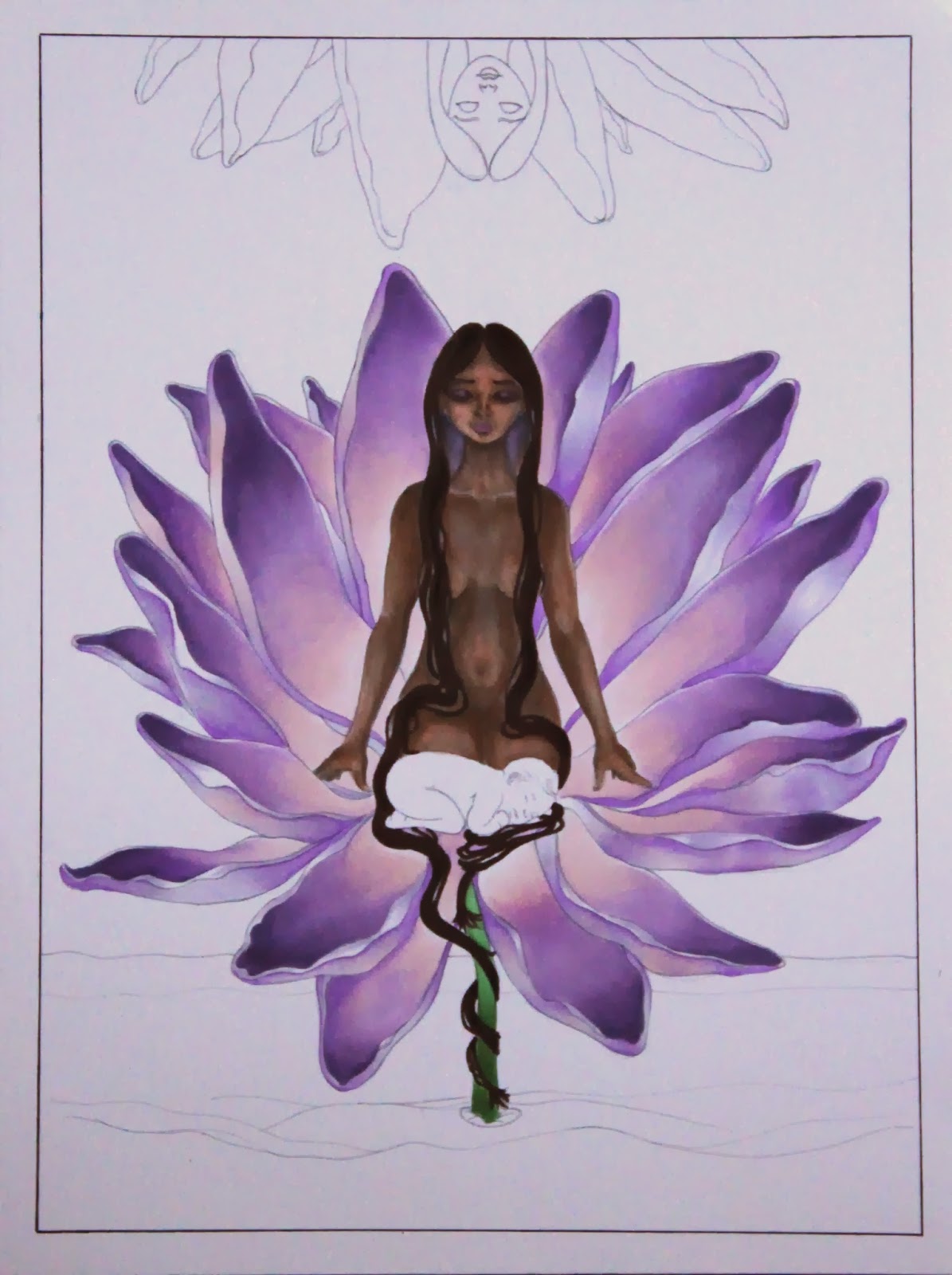 ...well, I'll have to work more on this, I am afraid, probably with pencils, given that the paper has about taken as much ink as it possibly could. Things look much better now, though (believe me!...it's probably difficult to make out details, since I took the picture at dusk...).

There is still the upside down goddess, to deal with though...and I am not sure what to do, because ideally she is identical to the first one, but I am trying to avoid the mistakes I made there so....we'll see. :)
Posted by Astera at 11:09 PM 6 comments:

Last weekend, Bella had a pretty bad cold, so we stayed in the house both days. Overall it was pretty tiring (she was cranky, had a high fever at times), but there were some sweet peaceful moments.

At some point, my husband was playing the piano (something he rarely has time to do these days) and I was with my daughter in an adjacent room. She was playing on the floor and I was sitting next to her with a book, a pencil, and a piece of scrap paper.

I started doodling a piece, then Bella became interested in my activity, so we picked up her markers and we drew together. Sometimes she wants us to draw things for her. I would rather she did it, but I indulge her with the agreement that she has to pick the colors. We painted several little images. A couple of them had to do with my next project. Here they are, together with a more advanced stage of the final design (which I did of course on my own time ;)). 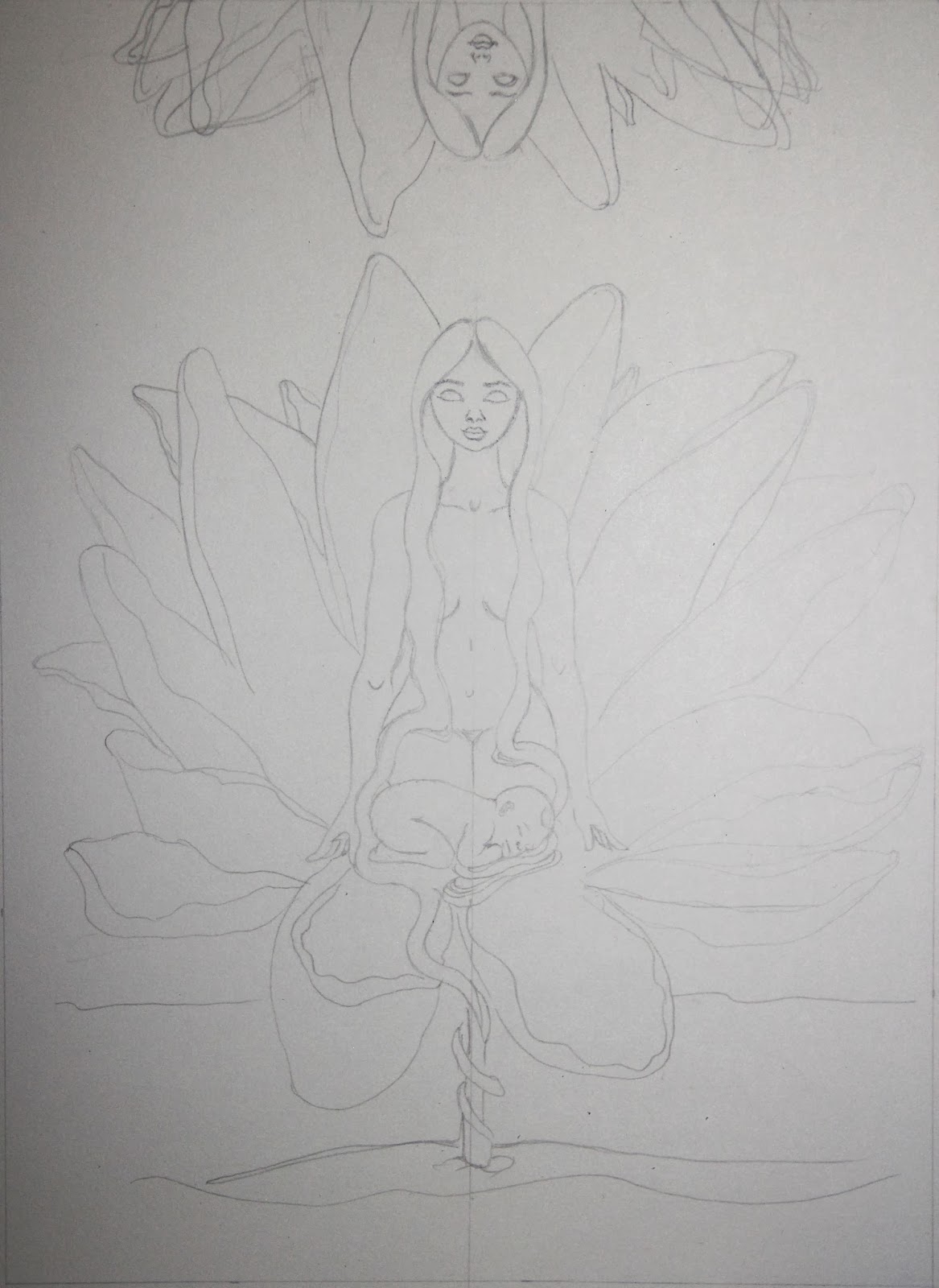 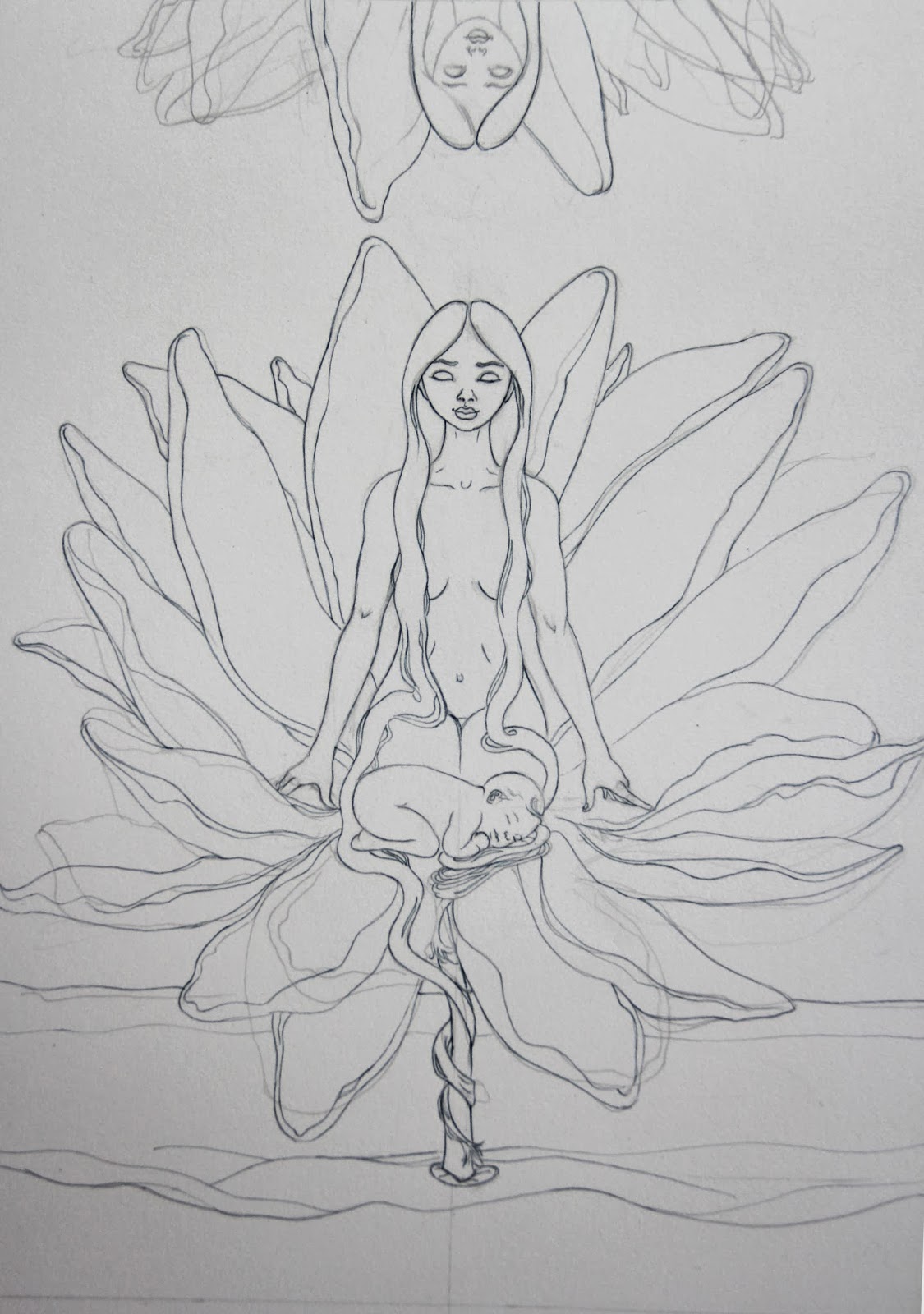 A homage to the myths of creation connected to the lotus flower...

Linking up to Manon's Paper Saturday and Tammie's Numen.
Posted by Astera at 4:10 PM 13 comments:


Here is our little owl family. Morning is coming and after a long night of watch and play, the sweet chicks are ready to go to bed (and mommy too), but they are waiting for daddy to come home. Hey. there he is! Let's say "have a good day" to everybody and snuggle in our cozy shelter until sunset. 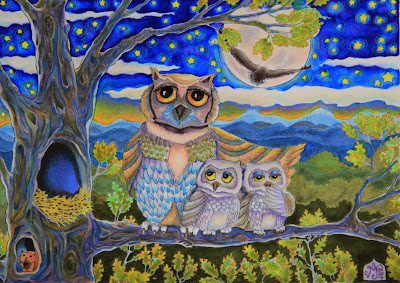 Now, one might ask, how healthy is it for a squirrel to live next door to an owl? But this is a friendly fantastic forest where rodents are buddies not food...;)

As a new year resolution, I joined Paper Saturdays, a group of artists with a passion for paper and all the art form that can be created with it. Creative blogger Manon Visser hosts this lovely initiative.

Ever since my childhood I had a special love for paper. Most of my games involved drawing, cutting, pasting any sort of shapes, animals, homes...then, for the longest time I stopped playing with paper as I rarely had time for drawing. My studies, travels and other activities absorbed me completely. After graduating and settling down, though the passion resurfaced.

Now, every once in a while, I even play with paper dolls. In previous post I mentioned how much I enjoy the beautiful porcelain dolls that Marina Bychkova of Enchanted Dolls make. When I discovered her blog a few years back, I decided to participate in a contest she held. My idea was to make a paper version of one of her dolls (the beloved Edie, in her unfinished incarnation of Cosmos Exploratum Genesis) and to give it a special paper case in the shape of a matrioska. The idea behind it was to show how Marina's art bridges her Russian roots with modern art. Since Cosmos has never been completed as a doll and never received a background story from her creator, I invented a little sci-fi tale to go with the illustration on the matryoshka's surface.

Below, you can see a very early drawing done in watercolor (yes it's terrible...but I was experimenting at the time) and a prototype of the doll I ended up sending her. 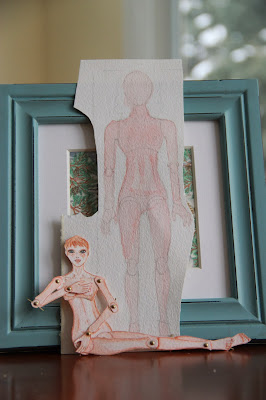 The following are images of the final matryoshka. I guess it looks quite rudimentary, but I had a lot of fun making it. It was like being a small child again, plus I tried to measure myself with the depiction of a futuristic landscape...which was quite challenging.

Anyways, I made more paper dolls ever since, as you can see from this blog. I never published this one before, though. I hope you enjoyed walking with me down memory lane!

Following the inspiration provided by my daughter's passion for animals, I feel I have to make an attempt to draw owls, as she loves them so much. There are wonderful examples of owl-art online. I will just add my voice to the chorus of admirers of these majestic and interesting birds. 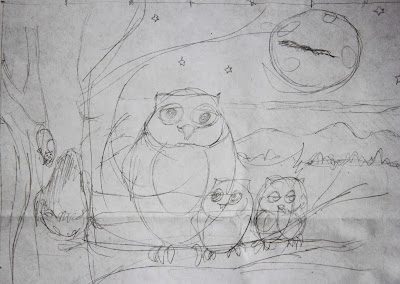 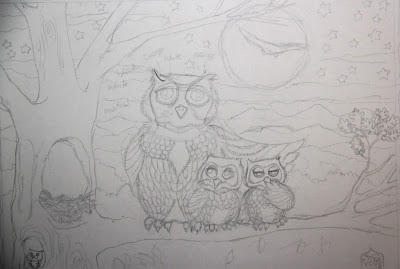 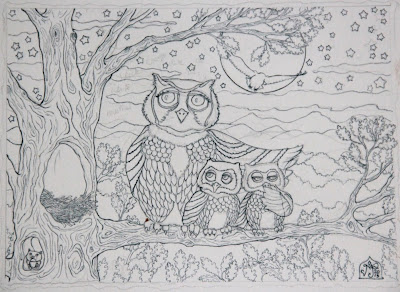