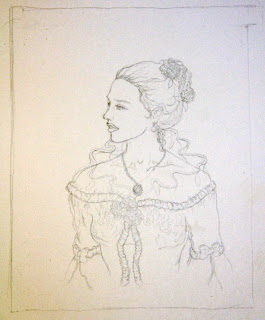 Dear friends, how are your vacations proceeding? I went back to work a couple of days, but things were pretty slow, as you can imagine and so it was not too bad. Today I am back on holiday and I take advantage of the free time to catch up with you.
Christmas was fun and pleasantly spent celebrating with the Italian friends that have become our family here in the USA. Now we are getting ready for New Year's Eve. This year nobody felt like cooking so we decided to try for the first time to go and eat out...I'll let you know how that works out for us...

Going back to art, I wanted to show you this WIP and final drawing. It's my gift to my friend Mayple (Monika Victoria) of The long lost wood. She is an amazing professional artist I met on the Enchanted doll forum and I greatly admire. This year, she is having the adventure of a lifetime: she left her native Australia to tour Europe. She is now living in Hungary where she is working full time on her art. Her paintings are delicate and daunting, ethereal and full of life. Go have a look if you don't know her already. She is also on flickr.
It has been a particular Christmas for Mayple and I wanted to make her feel she is not alone, although far away from home and her dear ones. I also wanted to thank her for the art she has sent me (still in the mail I am afraid...as soon as it gets here, I'll show it to you all  ;)...sometime snail mail is maddening...). Anyways, since she loves 18th Century costumes and she is now in Europe, I thought I would make an attempt to portray her as a lady in costume with a backdrop of the land of her ancestors. Therefore, I referenced one of the pictures she has published on her blog and that I like a lot for the beautiful light and for the sweet  and intent expression of her face, which I thought well represents her character, even if we never actually met in person. It must have been a good choice of reference because for once I did not have to struggle to reproduce the feature of my subject. In a matter of a couple of hours, I had the pencils and inking done...I know that's not fast by any means, but for my standards it's like being Speedy Gonzalez! 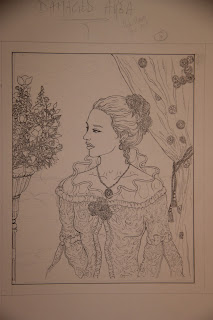 Then the fun began. I wanted to show her as if she was standing on the balcony of a palace overlooking a Hungarian landscape. Thus the drapery on the back and the flowers on the left. At this point I had not yet researched ideas for the background, but I had very clear ideas about the colors of the dress and the flowers in her hair (the latter being a typical feature of real life Mayple...her up-does are adorable. :)). So I quickly worked on these aspects and on the floral composition. I am not sure that the amount of work I put in that vase was called for, because as you will see in the final product, it becomes kind of lost in the background. Alas, you have probably noticed by now that I cannot resist focusing on tiny (and often irrelevant) details... 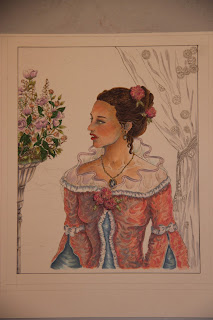 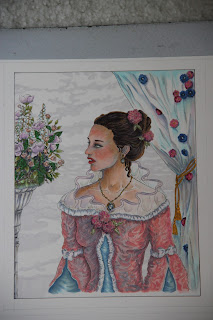 As I started working on the drapery in the back I realized that more depth of color-shadows was required by the character skin, so every once in a while I went back and add a new layer of color, although i was always a bit concerned about overdoing it. And in truth, there was a moment when I decided to use a particularly dark blue violet shadow on her cheeks and forehead that made me fear for the worst...Immediately after the sudden defection of the beige I was using to smooth things up put me in a panic. You should have see how terribly scarred by diagonal stripes was poor Mayple's face...My husband heard a desperate scream and wanted to see what I had done but I could not bring myself to show him....and I feel I had to act quickly...so I looked for alternatives in the palette and fortunately found a couple of earth tones that saved the whole thing (after tons of layers, of course). Too bad I don't recall the details of what copics I actually used (I worked on this piece before Thanksgiving), although I remember that Brick Beige was the one marker that stopped working and created the whole mess. 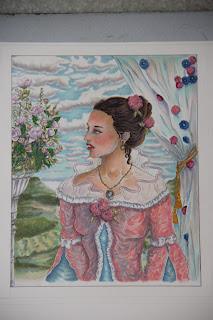 After fixing the skin issues and having completed the foreground, I started looking for a background. I found a beautiful picture on Google that depicted the Balaton region and I decided to reference it. I tried to figure out who took the picture but could not...it's a very popular image, used in a gazillion sites...if anybody knows the author I'll be happy to give her/him the due acknowledgement.

The background was more relaxing of a job and everything went pretty smoothly. As you can see in the picture above, I first used a light shade of grey to set out the outlines of the landscape and to prevent the colors of the sky and the fields from becoming too bright and dominant. Despite this precaution, the business of the clouds in the sky was a bit distracting, so I used my Derwent pastels pencils (mainly white) to tone down the contrast there....

And here is the final result: 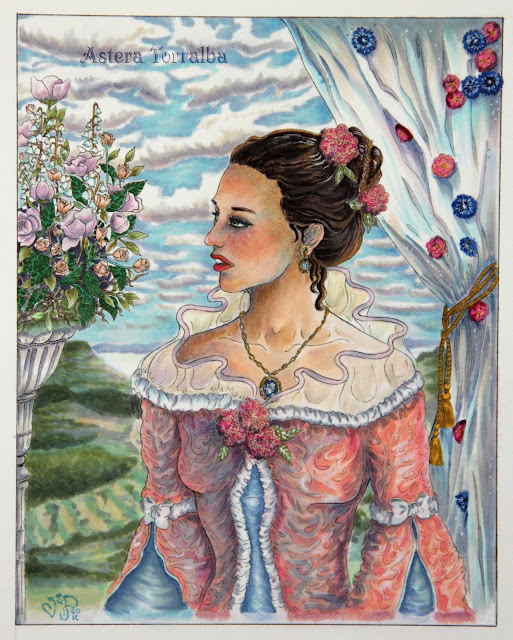 I know I am kind of late for the season greetings. I was hoping to show you new drawings, but with all the preparations, the extra-errands, the cooking, and the tired evenings, I was not able to finish anything. So today, at the very last minute, let me send you all my best wishes for wonderful Holidays and a very happy and prosperous 2012.
Hugs,
Astera

PS: in my picture folder from last year I found an image of beauty to help conveying my greetings...my sweet Sophie and her Christmas tree....Buon Natale!

I started making a new doll, but I stopped because I really wanted to get a new and challenging (for me) project going. It has been floating in my mind for a while, but other more immediate (and, let's say it, easier) subjects took priority. Now I think the time has come  to give it a try and see what happens.

Over the years, I have given to each of my close friends a drawing as a present for Christmas or their birthdays. This time, I chose a friend who is a great Shakespeare appreciator. For some reasons, I believe that there is a certain resemblance between this guy and the Bard. So I thought it would be fun to make a portrait of my friend in Elizabethan garb, surrounded by his beloved characters...

In this case, I am going to be able to show you the work in progress, as I am pretty sure G.P. does not read my blog...;). Below you can see the pencil work.
There are some aspects of it of which I am satisfied, for example I am rather happy with the looks of the guys. I am used to depict female subjects and I always feel intimidated when a male figure is required...As for the general composition it came out a rather different from what I had in mind, but my limited skills did not allow me to completely follow my whims...Too bad, hope you and, most importantly, my good friend, will like the final result all the same. ;) 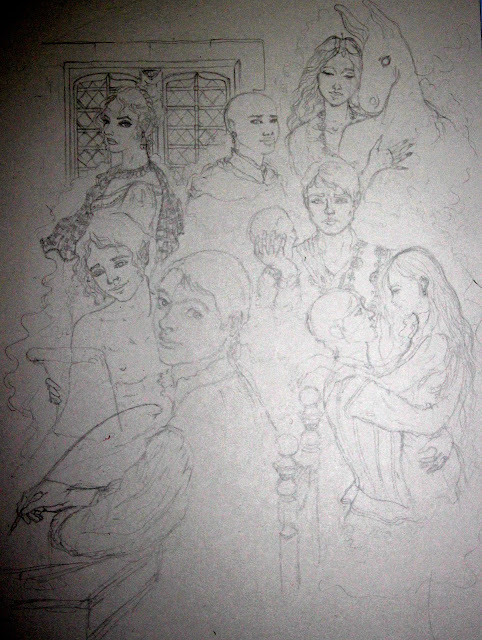 PS: I apologize for the poor quality of the picture, but I took it at night with rather bad illumination and I had to play around with the levels a lot in order to make the pencil lines visible. I was also very conservative on the amount of pressure I put on my pencil while I was drawing, as I knew I would likely have to make a lot of corrections to faces and costumes. Speaking of which, and since I have not yet inked her, do you think that Juliet's head/face (bottom right) is too small compared to the rest of her body? My hubby thinks so, but I like her profile a lot so I am reluctant to change it. On the other hand if the majority of your dispassionate eyes think I should, please let me know! Thanks and stay tune for the next steps! :)
Posted by Astera at 10:11 AM 2 comments: